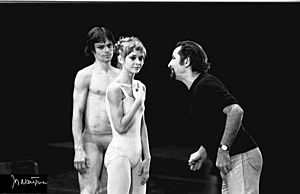 Maurice Béjart ( 1 January 1927 – 22 November 2007) was a French-born dancer, choreographer and opera director who ran the Béjart Ballet Lausanne in Switzerland. He was awarded Swiss citizenship posthumously.

Maurice-Jean Berger was born in Marseille, France in 1927, the son of French philosopher Gaston Berger. Fascinated by a recital of Serge Lifar, he decided to devote himself entirely to dance. In South France days, he had studied under Mathilde Kschessinska.

In 1945, he enrolled as a corps de ballet at the Opéra de Marseille. From 1946, he had studied under Madam Rousanne (Sarkissian), Léo Staats, Madam Lyubov Yegorova and Olga Preobrajenska at "Studio Wacker", etc. in Paris.

In 1948, he was also formed with Janine Charrat, Yvette Chauviré and then with Roland Petit, in addition he had studied under Vera Volkova at London. 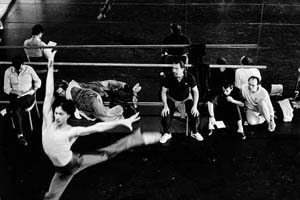 In 1987 he moved to Lausanne in Switzerland, where he founded the Béjart Ballet Lausanne, one of the most famous and successful dance companies in the world.

In 1973, with the Ballet du XXe siecle, he premiered "Golestan", on a poem by Sa'di, based on Iranian traditional music. The ballet was commissioned by the Shiraz-Persepolis Festival of Arts where it was premiered. The first performance of "Improvisation sur Mallarme III" with music by Boulez also took place at that Festival in 1973. "Farah", also based on Iranian traditional music was the Ballet's own commission, premiered in Brussels in 1976 and brought to the Shiraz-Persepolis Festival that same year. The 1976 Festival also witnessed the first performance of "Heliogabalus", based on a poem by Artaud. The Festival's patron was Farah Pahlavi, the former Empress of Iran, with whom Béjart kept strong ties to the end. Béjart received the Deutscher Tanzpreis in 1994.

Among his works is a thoroughly revised version of The Nutcracker, presumably inspired by his own life story, which he staged in 2000. It still uses Tchaikovsky's original score, but completely scraps the original plot and characters, instead supplying a new story about a boy's efforts to re-connect with his mother.

Béjart was the founder of several dance schools:

The Rudra School is still open and is one of the most famous professional dance schools in the world. In 1996, Béjart has directed a workshop for professionals at the Teatro Comunale di Ferrara and among students was Paolo Franzato, performer and director among the most appreciated in Italy.

During his lifetime, Béjart received many awards and distinctions for his contributions to the arts.

He received the Japanese Order of the Rising Sun.

In 1994, he was appointed to the Académie des Beaux Arts.

In 2003, he was appointed Commandeur des Arts et des Lettres.

In 2003, he won the Prix Benois de la Danse for lifetime achievement.

All content from Kiddle encyclopedia articles (including the article images and facts) can be freely used under Attribution-ShareAlike license, unless stated otherwise. Cite this article:
Maurice Béjart Facts for Kids. Kiddle Encyclopedia.