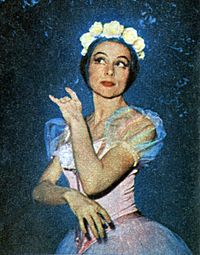 Yvette Chauviré (22 April 1917 – 19 October 2016) was a French prima ballerina and actress. She was born in Paris. Her dancing career was from 1937 to 1972. She was the étoile of the Paris Opera Ballet, and later its director. She was the holder of the Légion d'Honneur.

All content from Kiddle encyclopedia articles (including the article images and facts) can be freely used under Attribution-ShareAlike license, unless stated otherwise. Cite this article:
Yvette Chauviré Facts for Kids. Kiddle Encyclopedia.