Erik Bruhn was born in Copenhagen, Denmark, the fourth child and first son of Ellen (née Evers), owner of a hairdressing salon, and third child of Ernst Bruhn. His parents married shortly before his birth. Bruhn began training with the Royal Danish Ballet when he was nine years old, and made his unofficial début on the stage of Copenhagen's Royal Opera House in 1946, dancing the role of Adonis in Harald Lander's ballet Thorvaldsen.

He was taken permanently into the company in 1947 at the age of eighteen. Bruhn took the first of his frequent sabbaticals from the Danish company in 1947, dancing for six months with the short-lived Metropolitan Ballet in England, where he formed his first major partnership, with the Bulgarian ballerina Sonia Arova. He returned to the Royal Danish Ballet in the spring of 1948 and was promoted to soloist in 1949, the highest level a dancer can attain in the Danish ballet. Later in 1949, he again took a leave of absence and joined American Ballet Theatre in New York City, where he would dance regularly for the next nine years, although his home company continued to be the Royal Danish Ballet.

The turning point in Bruhn's international career came on 1 May 1955 with his début in the role of Albrecht in Giselle partnering Dame Alicia Markova, nearly twenty years his senior, in a matinée with Ballet Theatre in New York after only three days of rehearsal. The performance caused a sensation.

Bruhn formally resigned from the Danish ballet in 1961, by which time he had become internationally known as a phenomenon, although he continued to dance periodically with the company as a guest artist. In May 1961, he returned to Ballet Theatre for its New York season.

During the next 10 years, Bruhn formed long relationships as a guest artist not only with Ballet Theatre but with most all of the major ballet companies in Europe and North America, including the New York City Ballet, the Joffrey Ballet, the National Ballet of Canada, the Paris Opera Ballet, and London's Royal Ballet. 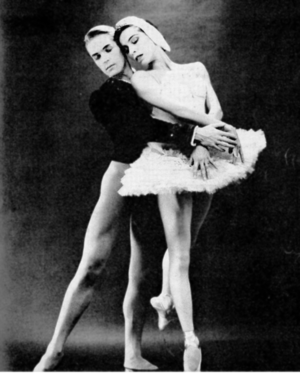 Bruhn was made a Knight of the Order of the Dannebrog, one of Denmark's highest honors, in 1963, the same year he was awarded the Nijinsky Prize in Paris. After retiring as a Danseur Noble in 1972, Bruhn danced character roles, such as Madge the Witch in La Sylphide, Dr. Coppelius, and Petrushka. He was director of the Swedish Opera Ballet from 1967 to 1973 and the National Ballet of Canada from 1983 until his death in 1986. Although twice offered the directorship of the Royal Danish Ballet, he twice declined the post. His productions of full-length Classical Ballets, such as La Sylphide, Giselle, Coppélia, and his somewhat controversial Swan Lake for the National Ballet of Canada, were well received, as were his stagings of pas de deux from the Bournonville repertoire. A superb teacher and coach, Bruhn was dedicated to imparting purity of form and dance as drama not spectacle. He believed in "complete identification" with the character being portrayed, "but under complete control. Because if you lose yourself completely, you cannot communicate." In 1974, he played a leading role in the stage play Rashomon with Susse Wold in Denmark, for which he won acclaim.

Bruhn met Rudolf Nureyev, the celebrated Russian dancer, after Nureyev defected to the West in 1961. Nureyev was a great admirer of Bruhn, having seen filmed performances of the Dane on tour in Russia with the American Ballet Theatre, although stylistically the two dancers were very different. Bruhn became the great love of Nureyev's life and the two remained close for 25 years, until Bruhn's death.

Erik Bruhn died in Toronto General Hospital on 1 April 1986 at the age of 57.

All content from Kiddle encyclopedia articles (including the article images and facts) can be freely used under Attribution-ShareAlike license, unless stated otherwise. Cite this article:
Erik Bruhn Facts for Kids. Kiddle Encyclopedia.