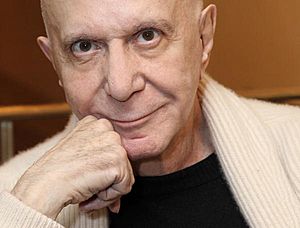 Roland Petit (13 January 1924 – 10 July 2011) was a French choreographer who wrote dances for Rudolf Nureyev and was later in charge of the Paris Opera.

He was born in 1924 at Villemomble, France and began ballet lessons at the age of nine at the Paris Opera's School of Dance. After World War II, Petit started several ballet companies in Paris, as well as creating 11 ballets for the Paris Opera. He worked in Hollywood for four years and choreographed the 1953 ballet "The Lady in the Ice" with Orson Welles. He also worked on movies including "Hans Christian Andersen" starring Danny Kaye (1952), "Daddy Long Legs" with Fred Astaire and Leslie Caron (1955) and "Anything Goes" with Bing Crosby and Zizi Jeanmaire (1956).

In 1970 he was head of the Paris Opera and wrote works for Nureyev and Margot Fonteyn. He then did the choreography for the Casino de Paris. He has also worked with the San Francisco Ballet, the Bolshoi (Moscow), La Scala (Milan), the Asami Maki Ballet (Tokyo) and the National Ballet of China. He spent the last part of his life working with the National Ballet of Marseille-Roland Petit.

All content from Kiddle encyclopedia articles (including the article images and facts) can be freely used under Attribution-ShareAlike license, unless stated otherwise. Cite this article:
Roland Petit Facts for Kids. Kiddle Encyclopedia.