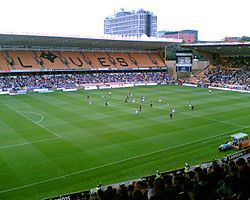 Molineux Stadium is a football stadium in Wolverhampton, England. It is the current home stadium of the Wolverhampton Wanderers F.C.. The stadium was built in 1889 and was opened that same year. The total number of people that can be seated is about 31,700, although the view from some seats in the Stan Cullis stand are restricted by the Steve Bull stand roof until it is redeveloped, due to this they are never sold. The stadium has also hosted the England internationals and, more recently, the England under-21 internationals, and the UEFA Cup Final in 1972.

All content from Kiddle encyclopedia articles (including the article images and facts) can be freely used under Attribution-ShareAlike license, unless stated otherwise. Cite this article:
Molineux Stadium Facts for Kids. Kiddle Encyclopedia.