The old Homebase building was taken over by Mecca Bingo.

The place name Oldbury, comes from the Old English 'Ealdenbyrig', - signifying that Oldbury was old even in early English times over 1000 years ago. Eald being Old English for 'old', Byrig is the plural of 'burh' in Old English - a burh being a fortification or fortified town. 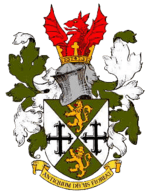 Coat of arms of the former Municipal Borough of Oldbury

Oldbury was part of the ancient parish of Halesowen, a detached part of Shropshire surrounded by Worcestershire and Staffordshire, until the Counties (Detached Parts) Act 1844, when it was incorporated back into Worcestershire after an absence of nine-hundred years. It became an Urban District in 1894, receiving Municipal Borough status in 1935.

In 1966, Oldbury was merged with the County Borough of Smethwick and the Municipal Borough of Rowley Regis to form the County Borough of Warley, which also included most of the Tividale area of Tipton and the eastern section of Oakham in Dudley. The geographical county boundaries were also changed to include the whole of Warley as part of Worcestershire; formerly both Rowley Regis and Smethwick had been in Staffordshire.

Oldbury council built several thousand houses, flats and bungalows for some 40 years until its disbandment, the 1,000th of which was completed in 1933 at Wallace Road near the border with Rowley Regis.

In 1974, Oldbury became part of the new Sandwell Metropolitan Borough (a merger between the county boroughs of West Bromwich and Warley), and was transferred into the West Midlands Metropolitan County. Since 1986, after the abolition of the West Midlands County Council, Sandwell effectively became a unitary authority. Sandwell Council's headquarters are situated in Oldbury Town Centre.

Oldbury comes within the B68 and B69 postal districts, the latter of which also covers part of Tipton. The postal town is Oldbury, although it previously came under the Warley post town, along with Smethwick, Rowley Regis, and Cradley Heath.

The first branch of Lloyds Bank was opened in Oldbury in 1864. The branch was founded to serve fellow Quakers Arthur Albright and John Wilson's local chemical factory. The original building survives to this day, but was recently made redundant as a bank and is now a Subway fast food restaurant.Subway moved from building early in 2012.

In October 1980, retail giant J Sainsbury opened one of its first SavaCentre hypermarkets in Oldbury town centre. 20 years later, it was rebranded as a traditional Sainsbury's store as the retailer gradually phased out the SavaCentre side of the business. The town has seen a large expansion in retail since then, including a Toys "R" Us superstore on Wolverhampton Road in the late 1980s and Oldbury Green Retail Park on the town's ring road in the mid 1990s. This, along with the development of the Merry Hill Shopping Centre some six miles away during the second half of the 1980s, has contributed to a decline in the fortunes of nearby West Bromwich town centre as a retail centre.

Due to the socio-economics of Sandwell, the area has a number of social housing organisations such as Black Country Housing Group which has been operating in Sandwell since its relocation from Birmingham in the 1980s.

In October 2013, commercial radio station Free Radio moved its local operations for the Black Country and Shropshire from Wolverhampton to new studios at Black Country House.

For over thirty years there were three railway stations in the parish named Oldbury; only one is still open, but under a new name. The oldest surviving one is on the Stour Valley Line (former LMS Railway), at Bromford Road. It has been there since the 1850s. It was originally called Oldbury & Bromford Lane Station, then Oldbury Station, but it is now known as Sandwell and Dudley.

The second nearest railway station to the centre of Oldbury is at Langley Green, at Western Road, on the Stourbridge Extension Line, now the Birmingham to Worcester via Kidderminster Line. It opened in April 1867 and was originally called Langley Green & Rood End Station. However a short half-mile long branch line, the Oldbury Railway, was linked to the station with its own (third) platform. It opened in November 1884; and Langley Green & Rood End Station was then renamed Langley Green. The Oldbury Railway, which also linked to Albright and Wilson, had both a passenger station, called Oldbury railway station, on Halesowen Road; and a goods station, Oldbury Goods railway station, at the Birmingham Canal Navigations wharf in Oldbury. Passenger services ran to Oldbury Station until March 1915; and the line closed completely other than as a freight line for Albright and Wilson. All traces of its viaduct and embankment beyond Tat Bank Road were destroyed when the M5 motorway was built.

The M5 has served Oldbury since 1964 and passes the town on an elevated section built on reinforced concrete pillars. Access is from junction 2. This is also the closest junction to the Black Country Living Museum in Dudley.

All content from Kiddle encyclopedia articles (including the article images and facts) can be freely used under Attribution-ShareAlike license, unless stated otherwise. Cite this article:
Oldbury, West Midlands Facts for Kids. Kiddle Encyclopedia.