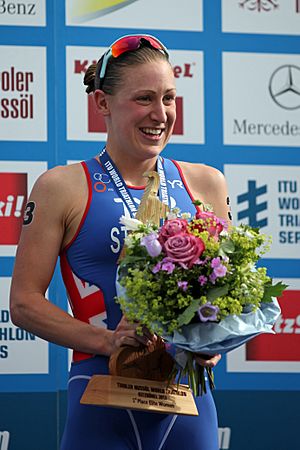 Jodie Lee Stimpson (born 8 February 1989) is a British professional triathlete. In 2013, she finished runner up in the ITU World Triathlon Series.

In the prestigious French Club Championship Series Lyonnaise des Eaux, Stimpson represents Poissy Tri. In 2010, however, Stimpson took part in only one Lyonnaise triathlon, the Triathlon de Paris, and won the gold medal. Together with Erin Densham (Australia) and Jodie Swallow (Great Britain) she won the silver medal for her French club.

In 2011, Jodie won her 1st major title in Triathlon when part of the GB team which took Gold at the World Mixed Relay Championship.

On 24 July 2014, Stimpson won her 1st Global title, with Gold at the 2014 Commonwealth Games in the Triathlon.

Stimpson took gold in the mixed triathlon team relay at the 2014 Commonwealth Games, with the Brownlee brothers, Alistair and Jonathan, and Vicky Holland.

In the six years from 2005 to 2010 Stimpson took part in 17 ITU competitions and achieved six top ten positions. The following list is based upon the official ITU rankings and the Athlete's Profile Page. Unless indicated otherwise the following events are triathlons (Olympic Distance) and belong to the Elite category.

All content from Kiddle encyclopedia articles (including the article images and facts) can be freely used under Attribution-ShareAlike license, unless stated otherwise. Cite this article:
Jodie Stimpson Facts for Kids. Kiddle Encyclopedia.