Shinya Yamanaka speaking at a lecture on January 14, 2010 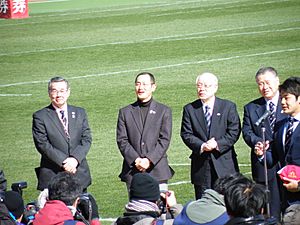 Shinya Yamanaka (山中 伸弥, Yamanaka Shin'ya, born September 4, 1962) is a Japanese stem cell researcher and a Nobel Prize laureate. He serves as the director of Center for iPS Cell (induced Pluripotent Stem Cell) Research and Application and a professor at the Institute for Frontier Medical Sciences at Kyoto University; as a senior investigator at the UCSF-affiliated Gladstone Institutes in San Francisco, California; and as a professor of anatomy at University of California, San Francisco (UCSF). Yamanaka is also a past president of the International Society for Stem Cell Research (ISSCR).

He received the 2010 BBVA Foundation Frontiers of Knowledge Award in the biomedicine category, the 2011 Wolf Prize in Medicine with Rudolf Jaenisch, and the 2012 Millennium Technology Prize together with Linus Torvalds. In 2012, he and John Gurdon were awarded the Nobel Prize for Physiology or Medicine for the discovery that mature cells can be converted to stem cells. In 2013, he was awarded the $3 million Breakthrough Prize in Life Sciences for his work.

Yamanaka was born in Higashiōsaka, Japan, in 1962. After graduating from Tennōji High School attached to Osaka Kyoiku University, he received his M.D. degree at Kobe University in 1987 and his Ph.D. degree at Osaka City University Graduate School in 1993. After this, he went through a residency in orthopedic surgery at National Osaka Hospital and a postdoctoral fellowship at the J. David Gladstone Institutes of Cardiovascular Disease, San Francisco.

Afterwards, he worked at the Gladstone Institutes in San Francisco, US, and Nara Institute of Science and Technology in Japan. Yamanaka is currently a professor at Kyoto University, where he directs its Center for iPS Research and Application. He is also a senior investigator at the Gladstone Institutes as well as the director of the Center for iPS Cell Research and Application.

Between 1987 and 1989, Yamanaka was a resident in orthopedic surgery at the National Osaka Hospital. His first operation was to remove a benign tumor from his friend Shuichi Hirata, a task he could not complete after one hour when a skilled surgeon would have taken ten minutes or so. Some seniors referred to him as "Jamanaka", a pun on the Japanese word for obstacle.

From 1993 to 1996, he was at the Gladstone Institute of Cardiovascular Disease. Between 1996 and 1999, he was an assistant professor at Osaka City University Medical School, but found himself mostly looking after mice in the laboratory, not doing actual research.

His wife advised him to become a practicing doctor, but instead he applied for a position at the Nara Institute of Science and Technology. He stated that he could and would clarify the characteristics of embryonic stem cells, and this can-do attitude won him the job. From 1999–2003, he was an associate professor there, and started the research that would later win him the 2012 Nobel Prize. He became a full professor and remained at the institute in that position from 2003–2005. Between 2004 and 2010, Yamanaka was a professor at the Institute for Frontier Medical Sciences. Currently, Yamanaka is the director and a professor at the Center for iPS Cell Research and Application at Kyoto University.

In 2006, he and his team generated induced pluripotent stem cells (iPS cells) from adult mouse fibroblasts. iPS cells closely resemble embryonic stem cells, the in vitro equivalent of the part of the blastocyst (the embryo a few days after fertilization) which grows to become the embryo proper. They could show that his iPS cells were pluripotent, i.e. capable of generating all cell lineages of the body. Later he and his team generated iPS cells from human adult fibroblasts, again as the first group to do so. A key difference from previous attempts by the field was his team's use of multiple transcription factors, instead of transfecting one transcription factor per experiment. They started with 24 transcription factors known to be important in the early embryo, but could in the end reduce it to 4 transcription factors – Sox2, Oct4, Klf4 and c-Myc.

The 2012 Nobel Prize in Physiology or Medicine was awarded jointly to Sir John B. Gurdon and Shinya Yamanaka "for the discovery that mature cells can be reprogrammed to become pluripotent."

There are different types of stem cells. These are some types of cells that will help in understanding the material.

The prevalent view during the early 20th century was that mature cells were permanently locked into the differentiated state and cannot return to a fully immature, pluripotent stem cell state. It was thought that cellular differentiation can only be a unidirectional process. Therefore, non-differentiated egg/early embryo cells can only develop into specialized cells. However, stem cells with limited potency (adult stem cells) remain in bone marrow, intestine, skin etc. to act as a source of cell replacement.

The fact that differentiated cell types had specific patterns of proteins suggested irreversible epigenetic modifications or genetic alterations to be the cause of unidirectional cell differentiation. So, cells progressively become more restricted in the differentiation potential and eventually lose pluripotency.

In 1962, John B. Gurdon demonstrated that the nucleus from a differentiated frog intestinal epithelial cell can generate a fully functional tadpole via transplantation to an enucleated egg. Gurdon used somatic cell nuclear transfer (SCNT) as a method to understand reprogramming and how cells change in specialization. He concluded that differentiated somatic cell nuclei had the potential to revert to pluripotency. This was a paradigm shift at the time. It showed that a differentiated cell nucleus has retained the capacity to successfully revert to an undifferentiated state, with the potential to restart development (pluripotent capacity).

However, the question still remained whether an intact differentiated cell could be fully reprogrammed to become pluripotent.

Shinya Yamanaka proved that introduction of a small set of transcription factors into a differentiated cell was sufficient to revert the cell to a pluripotent state. Yamanaka focused on factors that are important for maintaining pluripotency in embryonic stem (ES) cells. This was the first time an intact differentiated somatic cell could be reprogrammed to become pluripotent.

Knowing that transcription factors were involved in the maintenance of the pluripotent state, he selected a set of 24 ES cell transcriptional factors as candidates to reinstate pluripotency in somatic cells. First, he collected the 24 candidate factors. When all 24 genes encoding these transcription factors were introduced into skin fibroblasts, few actually generated colonies that were remarkably similar to ES cells. Secondly, further experiments were conducted with smaller numbers of transcription factors added to identify the key factors, through a very simple and yet sensitive assay system. Lastly, he identified the four key genes. They found that 4 transcriptional factors (Myc, Oct3/4, Sox2 and Klf4) were sufficient to convert mouse embryonic or adult fibroblasts to pluripotent stem cells (capable of producing teratomas in vivo and contributing to chimeric mice).

These pluripotent cells are called iPS (induced pluripotent stem) cells; they appeared with very low frequency. iPS cells can be selected by inserting the b-geo gene into the Fbx15 locus. The Fbx15 promoter is active in pluripotent stem cells which induce b-geo expression, which in turn gives rise to G418 resistance; this resistance helps us identify the iPS cells in culture.

Moreover, in 2007, Yamanaka and his colleagues found iPS cells with germline transmission (via selecting for Oct4 or Nanog gene). Also in 2007, they were the first to produce human iPS cells.

Some issues that current methods of induced pluripotency face are the very low production rate of iPS cells and the fact that the 4 transcriptional factors are shown to be oncogenic.

In July 2014, a scandal regarding the research of Haruko Obokata was connected to Yamanaka. She could not find the lab notes from the period in question and was made to apologise.

Since the original discovery by Yamanaka, much further research has been done in this field, and many improvements have been made to the technology. Improvements made to Yamanaka's research as well as future prospects of his findings are as follows:

Yamanaka's research has "opened a new door and the world's scientists have set forth on a long journey of exploration, hoping to find our cells’ true potential."

In 2013, iPS cells were used to generate a human vascularized and functional liver in mice in Japan. Multiple stem cells were used to differentiate the component parts of the liver, which then self-organized into the complex structure. When placed into a mouse host, the liver vessels connected to the hosts vessels and performed normal liver functions, including breaking down of drugs and liver secretions.

In 2022, Yamanaka factors were shown to effect age related measures in aged mice.

In 2007, Yamanaka was recognized as a "Person Who Mattered" in the Time Person of the Year edition of Time Magazine. Yamanaka was also nominated as a 2008 Time 100 Finalist. In June 2010, Yamanaka was awarded the Kyoto Prize for reprogramming adult skin cells to pluripotential precursors. Yamanaka developed the method as an alternative to embryonic stem cells, thus circumventing an approach in which embryos would be destroyed.

In May 2010, Yamanaka was given "Doctor of Science honorary degree" by Mount Sinai School of Medicine.

In September 2010, he was awarded the Balzan Prize for his work on biology and stem cells.

Yamanaka has been listed as one of the 15 Asian Scientists To Watch by Asian Scientist magazine on May 15, 2011. In June 2011, he was awarded the inaugural McEwen Award for Innovation; he shared the $100,000 prize with Kazutoshi Takahashi, who was the lead author on the paper describing the generation of induced pluripotent stem cells.

In June 2012, he was awarded the Millennium Technology Prize for his work in stem cells. He shared the 1.2 million euro prize with Linus Torvalds, the creator of the Linux kernel. In October 2012, he and fellow stem cell researcher John Gurdon were awarded the Nobel Prize in Physiology or Medicine "for the discovery that mature cells can be reprogrammed to become pluripotent."

Yamanaka practiced judo (2nd Dan black belt) and played rugby as a university student. He also has a history of running marathons. After a 20-year gap, he competed in the inaugural Osaka Marathon in 2011 as a charity runner with a time of 4:29:53. He took part in Kyoto Marathon to raise money for iPS research since 2012. His personal best is 3:25:20 at 2018 Beppu-Ōita Marathon.

All content from Kiddle encyclopedia articles (including the article images and facts) can be freely used under Attribution-ShareAlike license, unless stated otherwise. Cite this article:
Shinya Yamanaka Facts for Kids. Kiddle Encyclopedia.