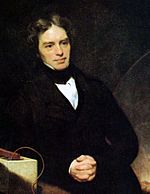 Faraday's laws of electrolysis are a set of scientific laws used in chemistry. They are used to express magnitudes of electrolytic effects. They were first described by Michael Faraday in 1834.

The first law states that the mass of a substance produced by electrolysis is directly proportional to the quantity of electricity that passes through the cell.

All content from Kiddle encyclopedia articles (including the article images and facts) can be freely used under Attribution-ShareAlike license, unless stated otherwise. Cite this article:
Faraday's laws of electrolysis Facts for Kids. Kiddle Encyclopedia.