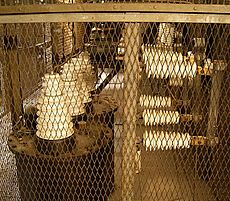 Common type of Faraday cage: it prevents machines inside from causing radio interference outside 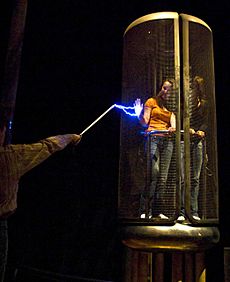 Girl inside is protected from electric arc outside

A Faraday cage or Faraday shield is an enclosure made from material that conducts electricity. It is used to block electric fields. The Faraday cage is named after the English scientist Michael Faraday, who invented it in 1836.

An electrical field outside the cage causes electric charges in the cage's conducting material to move around and cancel the field's effect inside the cage. It protects sensitive electronic equipment from external radio frequency interference (RFI).

Faraday cages are also used to enclose devices that produce RFI, such as radio transmitters, to prevent their radio waves from interfering with other nearby equipment. They are also used to protect people and equipment against actual electric currents such as lightning strikes and electrostatic discharges. The enclosing cage conducts current round the outside of the enclosed space and none passes though the inside space.

All content from Kiddle encyclopedia articles (including the article images and facts) can be freely used under Attribution-ShareAlike license, unless stated otherwise. Cite this article:
Faraday cage Facts for Kids. Kiddle Encyclopedia.