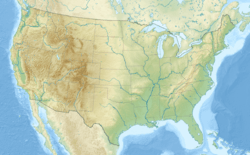 Camp Hale, between Red Cliff and Leadville in the Eagle River valley in Colorado, was a U.S. Army training facility constructed in 1942 for what became the 10th Mountain Division. It was named for General Irving Hale and was at an elevation of 9,200 feet (2,800 m) above sea level. Onslow S. Rolfe, who had developed mountain warfare techniques as commander of the 87th Mountain Infantry Regiment, was selected to command Camp Hale.

Soldiers were trained in mountain climbing, Alpine and Nordic skiing, cold-weather survival as well as various weapons and ordnance. When it was in full operation, approximately 15,000 soldiers were housed there.

The creation of an elite ski corps was a national effort, with assistance from the National Association of Ski Patrol, local ski clubs, and Hollywood. Enough men were recruited to create three army regiments, which were deployed after training. Camp Hale was decommissioned in November 1945.

The armed ski corps in the U.S. was based on the ski warfare tactics of the Finnish army during the Winter War (1939–1940). Early in the effort, 8,000 skiers and outdoorsmen were recruited. The camp was built to accommodate the effort at a cost of $30 million.

The War Department chose the location at 9,200 feet (2,800 m) because the Denver and Rio Grande Western Railroad stopped at Pando Rail Station and historically the snowfall in the Tennessee Pass area was plentiful. Construction of the camp began in the spring of 1942 and finished seven months later; during that period Highway 24 was moved, a sewage system installed to prevent pollution in the nearby town of Red Cliff, and the meadow drained. Additionally, the nearby town of Leadville to the south, the only source of recreation for the trainees, was persuaded to change its moral character, perceived "to be on a rather low plane."

The camp included mess halls, infirmaries, a ski shop, administrative offices, a movie theater, and stables for livestock. White painted barracks for 15,000 soldiers were built straight lines on the mountain meadow, but when the first trainees of the 87th Regiment of the 10th Light Division, quickly renamed the 10th Mountain Division, arrived in the winter of 1942 only a small portion of barracks were filled. The War Department needed to train more skiers in the elite fighting ski corps and asked the American Ski Patrol Association to contact ski racing clubs, ski schools, and local patrol units, nationwide—each applicant had to supply three letters of recommendation.

After 1942 problems in communication caused by the war slowed the recruitment effort. However, that year, Darryl Zanuck released Sun Valley Serenade, starring Sonja Henie and featuring the Glenn Miller Orchestra, and filmed on location in Sun Valley. The movie was a hit and the Hollywood effort helped to interest trainees in the ski corps. Two more wartime movies were made, each filmed at Camp Hale, featuring the white-clad elite troops—Mountain Fighters in 1943 and I Love a Soldier in 1944. The ski corps was featured on national magazine covers and popular radio shows. Although the effort brought in recruits to add the 86th and 85th Regiments for a full division, recruiters realized not enough skiers existed to fill the new regiments; thereafter, efforts were made to bring in rugged outdoorsmen of all types with the slogan that the 10th Mountain Division was made up of "college boys to cowboys". In addition, 200 women from the Women's Army Corps were brought in for administrative support. 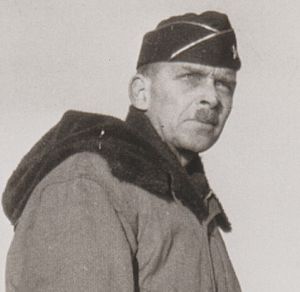 By 1943, Camp Hale had as many as 14,000 men in training. Conditions in the camp were harsh: the altitude required acclimation and the shallow valley created polluted inversion layers, as the primary energy source was coal. Recreation (outside of skiing) was non-existent because of the camp's high mountain isolation, which prevented even the USO from visiting, and many of the non-skiing trainees hated skiing. Trainees were taught to ski at Cooper Hill by ski instructors, brought from the ski-areas such as Sun Valley and Waterville Valley. Located three miles (5 km) south of the camp, Cooper Hill had on-site barracks for the instructors and a newly built T-bar lift for the trainees.

Camp Hale was active for just three years; it was deactivated in November 1945 and the 10th Mountain Division moved to Texas.

Camp Hale held "about 400 of the most incorrigible members of Field Marshal Erwin Rommel's Afrika Corps". On 15 February 1944, guard Private Dale Maple of the 620th Engineer General Service Unit drove away with German Sergeants Heinrich Kikillus and Erhard Schwichtenberg. They made it to Mexico before being arrested and turned over to U.S. authorities. In an unrelated scandal, in March 1944, five WACs were charged with exchanging notes with the prisoners. Three received sentences of four to six months and were dishonorably discharged.

Tibetans were secretly trained at Camp Hale by the CIA. "By February 1963, four groups totaling 135 Tibetans (ten more than originally planned) had arrived at Hale." This was "... the first wave of Tibetans." The site was chosen because of the similarities of the terrain with the Himalayan Plateau. The Tibetans nicknamed the camp "Dhumra", meaning "The Garden". The CIA circulated a story in the local press that Camp Hale was to be the site of atomic tests and would be a high security zone. Until the camp was closed in 1964, the entire area was cordoned off and its perimeter patrolled by military police. In all, around 259 Tibetans were trained at Camp Hale, and after it was dismantled, no Tibetans remained in Colorado. From 1958 to 1960, Anthony Poshepny trained various special missions teams, including Tibetan Khambas and Hui Muslims, for operations in China against the communist government.

In 1965, Camp Hale was dismantled and the land was deeded to the U.S. Forest Service. Since 1974, the area has become a youth development training center. An Eagle County non-profit organization, SOS Outreach, has used the site to expose disadvantaged youth to many of the same outdoor challenges experienced by the 10th Mountain Division.

In 1962, Pete Seibert, who was among the soldiers who trained at Camp Hale and then returned to the area after the war, founded the Vail Ski Resort nearby.

In July and August of 1985 the valley was the site of the North American Pathfinder camporee with 16,129 attending

In 2003, the U.S. Army Corps of Engineers began a cleanup effort to remove some of the unexploded ordnance at the site in conjunction with several other government agencies. This effort is still ongoing.

Most of the remnants of Camp Hale are located in the White River National Forest. There are camping grounds where overnight camping is permitted on this former army base. Several informational plaques are located throughout the area. These plaques contain historical information about camp construction, the 99th Infantry Battalion (aka "The Viking Battalion"), ski training, rock climbing/alpine training, the motor pool area, CIA training, and camp entertainment.

The Camp Hale site was proposed to be the first National Historic Landscape. While legislation is pending, this would allow protections for the greater Camp Hale area beyond the primary residence area (valley floor).

All content from Kiddle encyclopedia articles (including the article images and facts) can be freely used under Attribution-ShareAlike license, unless stated otherwise. Cite this article:
Camp Hale Facts for Kids. Kiddle Encyclopedia.