Gypsum is a home rule municipality in Eagle County, Colorado, United States. The population was 6,477 at the 2010 census. Gypsum is the home of an American Gypsum drywall plant and mine.

The town was named for nearby gypsum deposits, and was incorporated in 1911.

There were 1,150 households out of which 51.2% had children under the age of 18 living with them, 68.8% were married couples living together, 6.8% had a female householder with no husband present, and 20.2% were non-families. 12.3% of all households were made up of individuals and 1.3% had someone living alone who was 65 years of age or older. The average household size was 3.17 and the average family size was 3.47. 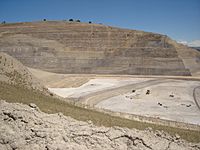 The old mine in 2006, looking east from the haul road

The largest industry in the town is American Gypsum's (formerly Centex and before that, Eagle Gypsum Limited) drywall plant. The facility produces a variety of wallboard products, which is shipped by both rail and truck. The company also operates an open pit gypsum mine in the hills north of town. The mine currently in operation is the second to have been located in the area. Its grade is quickly dropping, and the company intends to close and reclaim it soon. A new mine, roughly a mile away, has been permitted, and is currently in the development stage. Unlike most surface mines, which utilize drill and blast methods to recover material, the Eagle mine uses machines similar to pavement mills (Wirtgen 2200 SM Surface Miners) to cut 6-inch-deep (150 mm) swaths through the relatively soft rock. Front-end loaders then sort the material by color (white is gypsum, brown is waste) and load it into trucks to be hauled either to the plant or to waste piles (although recently, some of the waste has been used to construct the haul-road to the new mine).

This climate type is dominated by the winter season, a long, bitterly cold period with short, clear days, relatively little precipitation mostly in the form of snow, and low humidity. According to the Köppen Climate Classification system, Gypsum has a subarctic climate, abbreviated "Dfc" on climate maps.

All content from Kiddle encyclopedia articles (including the article images and facts) can be freely used under Attribution-ShareAlike license, unless stated otherwise. Cite this article:
Gypsum, Colorado Facts for Kids. Kiddle Encyclopedia.