Twin Lakes is a census-designated place located in Lake County, Colorado, United States near the base of Mount Elbert. The population as of the 2010 Census was 171. Twin Lakes has the ZIP Code 81251.

Lake County, one of the original 17 counties created by the Colorado legislature in 1861, was named for Twin Lakes. As originally defined, Lake County included a large portion of western Colorado to the south and west of its present boundaries.

The altitude of Twin Lakes is approximately 9200 ft (2780 m) above sea level, somewhat lower than Leadville.

As estimated in 2006, the following demographic data applied to ZIP code 81251, the best available approximation to the village of Twin Lakes (in Lake County): 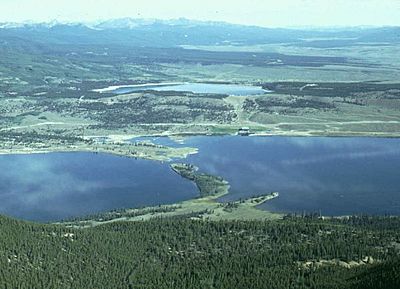 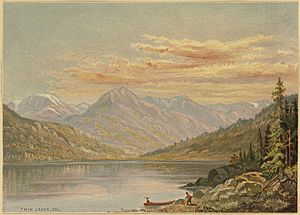 All content from Kiddle encyclopedia articles (including the article images and facts) can be freely used under Attribution-ShareAlike license, unless stated otherwise. Cite this article:
Twin Lakes, Lake County, Colorado Facts for Kids. Kiddle Encyclopedia.