Annemarie Moser-Pröll (born 27 March 1953) is a former World Cup alpine ski racer from Austria. Born in Kleinarl, Salzburg, she was the most successful female alpine ski racer during the 1970s, with six overall titles, including five consecutive. Moser-Pröll celebrated her biggest successes in downhill, giant slalom and combined races. In 1980, her last year as a competitor, she secured her third Olympic medal (and first gold) at Lake Placid and won five World Cup races. Her younger sister Cornelia Pröll is also a former Olympic alpine skier.

During her career, Moser-Pröll won the overall World Cup title a record six times, including five consecutive (1971–75). She has 62 individual World Cup victories, second to Lindsey Vonn on the female side. Though her record has been broken in absolute numbers, she is still the best ever woman in winning percentage (races won per races raced) because of the fewer races run each season during her era. She won five World Championship titles (3 downhill, 2 combined) and one Olympic gold medal. Of all female skiers, she is the one who won most races of a single discipline in a row (11 downhill races: all eight of the 1973 World Cup season, plus the first three of the following season).

The way to her first and only Olympic gold medal was quite long: At the 1972 games in Sapporo, Japan, she was considered the clear favourite for downhill and giant slalom, but in both events she finished second behind Marie-Theres Nadig of Switzerland. After winning a fifth consecutive title in overall and downhill, she interrupted her racing career to care for her ailing father, afflicted with lung cancer. She missed the entire 1976 World Cup season, including the 1976 Winter Olympics in Innsbruck, in her home country of Austria. After the death of her father in June 1976, she resumed competitive skiing and was immediately among the best, with second place in the overall World Cup standings for two seasons (1977, 1978), and won the overall title for the sixth time in 1979. At the 1980 Winter Olympics in Lake Placid, USA, she finished her extraordinary career by winning the downhill gold medal – with her 1972-rival Marie-Theres Nadig again on the podium, as bronze medalist.

Several weeks after the 1980 Olympics, she retired from competitive skiing and ran her own café, the "Weltcup-Café Annemarie" in Kleinarl, which was decorated with her extensive cup and trophy collection.

She married Herbert Moser in 1974 and their daughter Marion was born in 1982. In December 2003 her first grandchild was born.

Eight months after the death of her husband, she retired from the gastronomy business in 2008 and sold the establishment to local entrepreneurs, who keep running it as "Café-Restaurant Olympia." 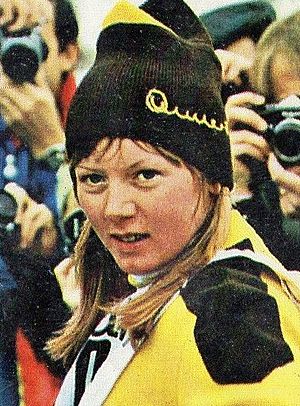 All content from Kiddle encyclopedia articles (including the article images and facts) can be freely used under Attribution-ShareAlike license, unless stated otherwise. Cite this article:
Annemarie Moser-Pröll Facts for Kids. Kiddle Encyclopedia.