Salzburg is a state (Land) of Austria. It is officially named Land Salzburg, colloquially Salzburgerland, to distinguish it from its eponymous capital Salzburg city and as such is the only state to be named after its capital. By its centuries-long history as an independent Prince-Bishopric, Salzburg's tradition differs from the other Austrian lands. 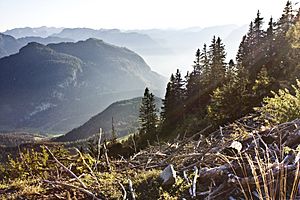 Salzburg state stretches along its primary river, the Salzach running from the Central Eastern Alps in the south – reaching a height of 3,657 metres (11,998 ft) at the mountain Großvenediger – down into the Alpine foothills in the north, with an area of 7,156 km2 (2,763 sq mi). It is located in the north of the country, close to the border with the German state of Bavaria. It is surrounded by the Austrian lands of Upper Austria in the northeast, by Styria in the east, by Carinthia in the south as well as by Tyrol, South Tyrol (Trentino-Alto Adige/Südtirol, Italy) and East Tyrol in the southwest. With 529,085 inhabitants, it is one of the country's smaller states in terms of population.

Running through the south are the main ranges of the Alpine divide (incl. the Hohe Tauern mountains) with numerous three-thousanders. The Dachstein massif and the Berchtesgaden Alps ranges of the Northern Limestone Alps border Salzburg Land to the east and north. 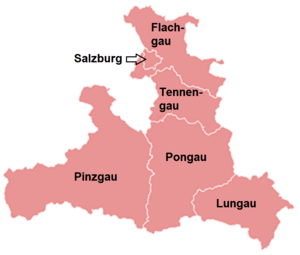 Wals-Siezenheim, a common municipality with about 12,000 inhabitants, is known as 'Austria's largest village'.

Salzburg as an independent state

Independence from Bavaria was secured in the late 14th century. The Archbishopric of Salzburg was an independent prince-bishopric and State of the Holy Roman Empire until German Mediatisation in 1803.

The territory was secularized and, as the Electorate of Salzburg, given as compensation to Ferdinand III, former Grand Duke of Tuscany, the brother of Emperor Francis II.

The end of the independence

Following the Austrian defeat at Austerlitz in 1805, Salzburg was annexed by Austria as compensation for the loss of Tyrol to the Kingdom of Bavaria, and Ferdinand was transferred to the Grand Duchy of Würzburg.

After Austria's defeat in 1809, the province was handed over to Bavaria in 1810.

The country divided between Bavaria and Austria

In 1816, following the defeat of Napoleon and the provision of adequate compensation to Bavaria at the Congress of Vienna, it was returned to Austria with the exception of the north-western Rupertiwinkel which remained Bavarian. The Salzburger Land was administered as the department of Salzach from Linz, the capital of Upper Austria. In 1849 the Duchy of Salzburg was established as a crown land of the Austrian Empire and, after 1866, Austria-Hungary.

Salzburg participated in World War I, as part of the Austro-Hungarian Empire. 49,000 Salzburgers were called to arms, of whom 6,000 were killed.

In 1918 after World War I, the Duchy of Salzburg was dissolved and replaced with the State of Salzburg, as a component part initially of German Austria and subsequently of the First Republic of Austria, the separate state which was mandated by the Allied powers. (However, in the November Plebiscite 99% of Salzburgers voted in favor of union with Germany.)

After the plebiscite of 1938, Salzburg state and all the territory of Austria was annexed to the Third Reich.

After the defeat of Nazi Germany in 1945, the Allies occupied the territory of Austria, being recognized as an independent territory under their rule. Salzburg was occupied by the United States.

Salzburg as an Austrian State

In 1955 Austria was again declared independent of the Allies and Salzburg was once again one of the reconstituted federal states of the second Republic Austria.

All content from Kiddle encyclopedia articles (including the article images and facts) can be freely used under Attribution-ShareAlike license, unless stated otherwise. Cite this article:
Salzburg (state) Facts for Kids. Kiddle Encyclopedia.