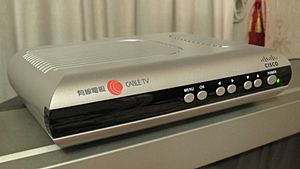 A settuop box for Cable TV

A set-top box is a small device that adds extra functionality to another media device, often a television. In general, there are different kinds of such devices:

The most important functions of a set top box are media playback (DVD, VHS videos, perhaps interacve as a game console), recording of the data received, and being able to receive data using different channels (for example Sattelite TV, TV over internet) or methods (sometimes, signals need to be decrypted first; some people want to watch digital tv on an analogue television).

All content from Kiddle encyclopedia articles (including the article images and facts) can be freely used under Attribution-ShareAlike license, unless stated otherwise. Cite this article:
Set-top box Facts for Kids. Kiddle Encyclopedia.