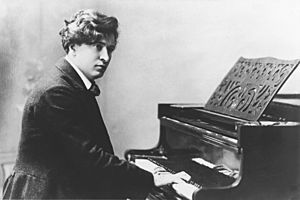 Ferruccio Busoni was born in Empoli in Tuscany in Italy. His parents were both musicians. His father played the clarinet and his mother played the piano. They were often touring when Ferruccio was young. He spent most of his childhood in Trieste.

Busoni was a child prodigy. He first played the piano in public at the age of seven. Two years later he played some of his own compositions in Vienna. The composer Franz Liszt heard him. He also met Liszt, Johannes Brahms and Anton Rubinstein.

For a short time he studied in Graz, then in Leipzig. He taught in several places including Helsinki, where he met Jean Sibelius as well as a young lady was to be his wife. In 1890 he won the Anton Rubinstein Competition with his Concert Piece for Piano and Orchestra. He taught in Moscow in 1890, and in the United States from 1891 to 1894 where he also toured as a virtuoso pianist.

In 1894 he went to Berlin where he stayed. He performed as a pianist and conductor and taught many gifted pianists. He wrote a book called Sketch of a New Aesthetic of Music. He did not agree with the strict rules that were used by most teachers for teaching composition. He thought that music was "born to be free". His thinking influenced his composition pupils who included Percy Grainger, Kurt Weill and Edgard Varèse.

During World War I, Busoni lived first in Bologna, where he was director of the conservatory, and later in Zürich. He refused to perform in any countries that were involved in the war. He returned to Berlin in 1920 where he gave master classes in composition.

Busoni died in Berlin from a kidney disease.

Busoni's music is based on the Romantic style, but it also starts to sound quite modern. He uses a lot of complicated counterpoint. Sometimes it is quite atonal. A lot of it is based on music of the past. He made many transcriptions, including piano transcriptions of several works by Johann Sebastian Bach.

Busoni was a virtuoso pianist, and his works for piano are difficult to perform. His Piano Concerto is extremely hard to play as well as being extremely long (about 70 minutes). The British pianist John Ogdon, who played it, called it "the longest and grandest piano concerto of all".

Some of his best known works include his suite for orchestra Turandot which he made into an opera, and his opera Doktor Faust which he had not finished when he died. It was finished by his student Philipp Jarnach, but in the 1980s Anthony Beaumont made a better version of it.

Busoni made a number of piano rolls, and a small number of these have been re-recorded onto CD. People who knew him disagree about whether these piano roll recordings show his playing at his best.

All content from Kiddle encyclopedia articles (including the article images and facts) can be freely used under Attribution-ShareAlike license, unless stated otherwise. Cite this article:
Ferruccio Busoni Facts for Kids. Kiddle Encyclopedia.