Empoli is a town in Tuscany, Italy, about 30 km southwest of Florence. It is 30 m above sea-level, to the south of the Arno. The plain of the town has been usable for agriculture since Roman times. Empoli is on the main railway line from Florence to Pisa and is well joined with the city of Siena. 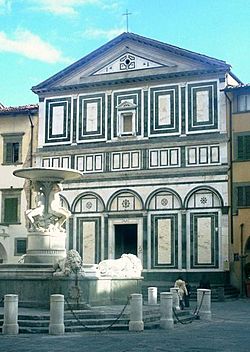 Empoli has a long tradition as an agricultural centre. It has given its name to a local kind of artichoke.

Empoli was already settled in the time of the early Roman Empire, and still existed in the 4th century AD. The river near the city was a good route for the trade of agricultural products, together with the local amphorae. Since the 8th century Empoli grew as a town around the castle, known as Emporium or Empolis. In 1119 it was controlled by Guidi. In 1182 it went under Florentine rule. In 1260, after the Battle of Montaperti, Empoli was the seat of a famous council in which Farinata degli Uberti opposed the destruction of Florence. Later Empoli became an important fortress.

In the frazione of Pontorme is the house of the painter Pontormo.

Empoli's main football team is Empoli F.C., which is currently playing in Serie B.

All content from Kiddle encyclopedia articles (including the article images and facts) can be freely used under Attribution-ShareAlike license, unless stated otherwise. Cite this article:
Empoli Facts for Kids. Kiddle Encyclopedia.