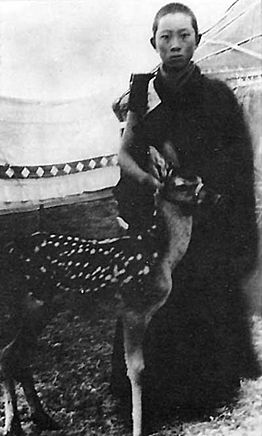 The Paṇchen Lama incarnation line began in the seventeenth century after the 5th Dalai Lama gave Chokyi Gyeltsen the title, and declared him to be an emanation of Buddha Amitaba. Officially, he became the first Panchen Lama in the lineage, while he had also been the sixteenth abbot of Tashilhunpo Monastery.

On 11 June 1949, at twelve years of age in Tibetan counts, Gonpo Tseten was enthroned at the major Gelugpa monastery in Amdo, Kumbum Jampa Ling monastery as the 10th Panchen Lama and given the name Lobsang Trinley Lhündrub Chökyi Gyaltsen. Attending were also Guan Jiyu, the head of the Mongolian and Tibetan Affairs Commission, and ROC Kuomintang Governor of Qinghai, Ma Bufang. Still in Lhasa, the Dalai Lama recognized the Panchen Lama Choekyi Gyaltsen a few years later, after they met.

The ROC wanted to use Choekyi Gyaltsen to create a broad anti-Communist base in Southwest China. The ROC's Kuomintang formulated a plan where three Tibetan Khampa divisions would be assisted by the Panchen Lama to oppose the Communists.

When Lhasa denied Choekyi Gyaltsen the territory the Panchen Lama traditionally controlled, he asked Ma Bufang to help him lead an army against Tibet in September 1949. Ma tried to persuade the Panchen Lama to come with the Kuomintang government to Taiwan when the Communist victory approached, but the Panchen Lama declared his support for the Communist People's Republic of China instead. In addition, the Dalai Lama regime was tottering, and his government displayed negligence in affairs, the Kuomintang using this to their advantage to expand into the Lhasa regime of the Dalai Lama. 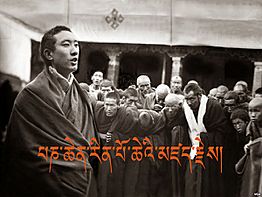 The young Panchen Lama at a Tibetan Monastery

The Panchen Lama reportedly supported China's claim of sovereignty over Tibet, and supported China's reform policies for Tibet. Radio Beijing broadcast the religious leader's call for Tibet to be "liberated" into Tibet, which created pressure on the Lhasa government to negotiate with the People's Republic.

At Kumbum Monastery, the Panchen Lama gave a Kalacakra initiation in 1951. That year, the Panchen Lama was invited to Beijing as the Tibetan delegation was signing the 17-Point Agreement and telegramming the Dalai Lama to implement the Agreement. He was recognized by the 14th Dalai Lama when they met in 1952.

After a tour through Tibet in 1962, the Panchen Lama wrote a document addressed to Prime Minister Zhou Enlai denouncing the abusive policies and actions of the People's Republic of China in Tibet. This became known as the 70,000 Character Petition. According to Isabel Hilton, it remains the "most detailed and informed attack on China's policies in Tibet that would ever be written."

The Panchen Lama met with Zhou Enlai to discuss the petition he had written. The initial reaction was positive, but in October 1962, the PRC authorities dealing with the population criticized the petition. Chairman Mao called the petition "... a poisoned arrow shot at the Party by reactionary feudal overlords."

For decades, the content of this report remained hidden from all but the very highest levels of the Chinese leadership, until one copy surfaced in 1996. In January 1998, upon the occasion of the 60th anniversary of the birth of the Tenth Panchen Lama, an English translation by Tibet expert Robert Barnett entitled A Poisoned Arrow: The Secret Report of the 10th Panchen Lama, was published. 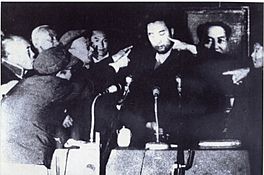 In 1964, he was publicly humiliated at Politburo meetings, dismissed from all posts of authority, declared 'an enemy of the Tibetan people', had his dream journal confiscated and used against him, and was then imprisoned. He was 26 years old at the time. The Panchen's situation worsened when the Cultural Revolution began. The Chinese dissident and former Red Guard Wei Jingsheng published in March 1979 a letter under his name but written by another anonymous author denouncing the conditions at Qincheng Prison, where the 10th Panchen Lama was imprisoned. In October 1977 he was released, but held under house arrest in Beijing until 1982. After his release, he was considered by the PRC authorities to be politically rehabilitated and he then rose to important positions. He served as Vice Chairman of the National People's Congress.

In 1978, after giving up his vows of an ordained monk, he travelled around China, looking for a wife to start a family. He began courting Li Jie, daughter of Dong Qiwu, a general in PLA who had commanded an Army in the Korean War. She was a medical student at Fourth Military Medical University in Xi'an. At the time, the Lama had no money and was still blacklisted by the party, but the wife of Deng Xiaoping and widow of Zhou Enlai saw the symbolic value of a marriage between a Tibetan Lama and a Han woman. They personally intervened to wed the couple in a large ceremony at the Great Hall of the People in 1979. One year later, the Panchen Lama was given the Vice Chairmanship of the National People's Congress and other political posts, and he was fully politically rehabilitated by 1982.

Li Jie bore a daughter in 1983, named Yabshi Pan Rinzinwangmo (Tibetan: ཡབ་གཞིས་པན་རིག་འཛིན་དབང་མོ་). Popularly known as the "Princess of Tibet", she is considered important in Tibetan Buddhism and Tibetan-Chinese politics, as she is the only known offspring in the over 620-year history of either the Panchen Lama or Dalai Lama reincarnation lineages.

Of her father's death, Rinzinwangmo reportedly refused to comment, allegedly attributing his early death to his generally poor health, extreme weight gain, and chronic sleep deprivation. The 10th Panchen Lama's death sparked a six-year dispute over his assets amounting to $20 million between his wife and daughter and Tashilhunpo Monastery. 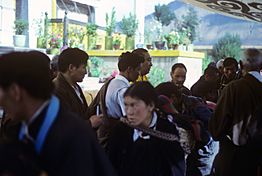 The 10th Panchen Lama visiting Tibet, and thousands of Tibetans walked for days to line up and receive a blessing in this rare photo taken in August 1987.

The Panchen Lama made several journeys to Tibet from Beijing, during 1980 and afterwards.

With the Panchen Lama's invitation, Khenchen Jigme Phuntsok joined him in 1988 on a consecration ritual in central Tibet, which became a monumental pilgrimage of sacred Buddhist sites in Tibet, among them the Potala Palace, the Norbulinka, the Nechung Monastery, then to Sakya Monastery and Tashilhunpo Monastery, and also to Samye Monastery.

Also in 1987, the Panchen Lama established a business called the Tibet Gang-gyen Development Corporation, envisioned for the future of Tibet whereby Tibetans could take the initiative to develop and join in their own modernization. Plans to rebuild sacred Buddhist sites destroyed in Tibet during 1959 and after were included. Gyara Tsering Samdrup worked with the business, but was arrested in May 1995 after the 11th Panchen Lama Gedhun Choekyi Nyima was recognized.

Early in 1989, the 10th Panchen Lama returned again to Tibet to rebury recovered bones from the graves of the previous Panchen Lamas, graves that had been destroyed at Tashilhunpo Monastery in 1959 by the Red Guards, and consecrated in a chorten built as the receptacle.

On 23 January 1989, the Panchen Lama delivered a speech in Tibet in which he said: "Since liberation, there has certainly been development, but the price paid for this development has been greater than the gains." He criticized the excesses of the Cultural Revolution in Tibet and praised the reform and opening up of the 1980s.

Five days later on 28 January, the Panchen Lama died in Shigatse at the age of 50. Although the official cause of death was said to have been from a heart attack, some Tibetans suspect foul play.

Many theories spread among Tibetans about the Panchen Lama's death. According to one story, he foresaw his own death in a message to his wife on their last meeting. In another, a rainbow appeared in the sky before his death. Other people, including the Dalai Lama, believe that he was poisoned by his own medical staff. Supporters of this theory cite remarks the Panchen Lama made on 23 January to high-ranking officials and that were published in the People's Daily and the China Daily.

In 2011, the Chinese dissident Yuan Hongbing declared that Hu Jintao, then the Communist Party Secretary of Tibet and the Political Commissar of the PLA's Tibet units, had masterminded the death of the 10th Panchen Lama.

All content from Kiddle encyclopedia articles (including the article images and facts) can be freely used under Attribution-ShareAlike license, unless stated otherwise. Cite this article:
Choekyi Gyaltsen, 10th Panchen Lama Facts for Kids. Kiddle Encyclopedia.