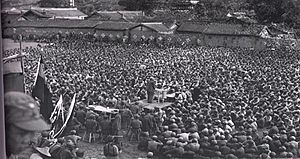 The Long March is the retreat of Mao Zedong and the Communists in 1934-35. The communists went to their stronghold away from Chiang Kai-shek and the Nationalists. Here they were able to join together and start fighting again to beat the Nationalists. They trekked 6,000 miles over 370 days, and only 8,000 survived out of 100,000 people. However, because they had survived such a difficult trial together the survivors were very dedicated and created a more cohesive group. Mao ZeDong rose up as a leader during this time.

How it changed China’s history

Different opinions about the march's result

The communists' believed they won by making a lot of soldiers survive and successfully meet the Communists party in Shaanxi. They also said it is so successful to run away from 100,000 soldiers encirclement and about 200,000 soldiers hunt between the long march.

The Nationalists' thought they were successful because the communists were running away from the battle and were forced to move to the other side of China. They killed at least half of the Red Army soldiers in China.

The reason they have different opinions is because their goals were very different: the Communists just wanted to survive the Nationalist army's attack. The Nationalists' goal was to destroy the Red Army in Jian Xi, making the communists weaker than before. It took the communists four years to rebuild their army and win the civil war.

All content from Kiddle encyclopedia articles (including the article images and facts) can be freely used under Attribution-ShareAlike license, unless stated otherwise. Cite this article:
Long March Facts for Kids. Kiddle Encyclopedia.