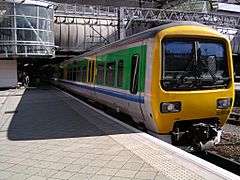 Class 323, no. 323209 waiting at Birmingham New Street on 24th September 2003. This unit was operated by Central Trains (now West midlands Trains) and is painted in Centro livery.

The British Rail Class 323 electric multiple units were built by Hunslet TPL from 1992-96. Forty-three 3-car units were built for inner-suburban services around Birmingham and Manchester. These trains were the last vehicles to be built by the struggling manufacturer Hunslet before it collapsed.

All content from Kiddle encyclopedia articles (including the article images and facts) can be freely used under Attribution-ShareAlike license, unless stated otherwise. Cite this article:
British Rail Class 323 Facts for Kids. Kiddle Encyclopedia.