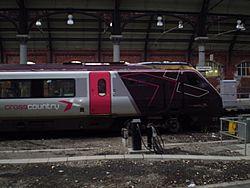 CrossCountry Voyager 220027 shows off the new livery at Darlington. 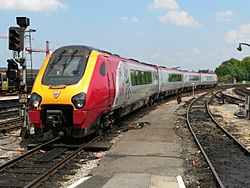 A Class 220 Virgin Voyager at Bristol 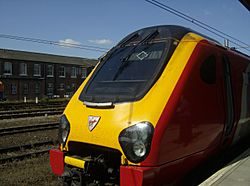 The Class 220 Voyager is a class of diesel-electric high-speed multiple-unit trains built by Bombardier Transportation for the British train operating company Virgin Trains, but are now operated by CrossCountry. They are air-conditioned throughout, with powered doors and a top speed of 125 mph (200 km/h). They were introduced to replace the thirty-year-old High Speed Train and Class 47 fleets. The trains were built between 2000 and 2001 and the first train entered service on 5 June 2001.

All content from Kiddle encyclopedia articles (including the article images and facts) can be freely used under Attribution-ShareAlike license, unless stated otherwise. Cite this article:
British Rail Class 220 Facts for Kids. Kiddle Encyclopedia.