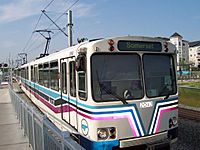 The C-Train runs on two major routes in Calgary; the north-east route, and the north-west to south route. There are currently 39 stations, 26 of which are major with heated areas.

There are three types of C-Train vehicles currently in service.

Calgary Transit currently runs over 160 bus routes, of which 86 are designated as "low access", and are accessible for those who need a wheelchair to move around. Calgary uses buses from four companies; Nova Bus, New Flyer Industries, General Motors Diesel Division and Motor Coach Industries. In 2004, Calgary Transit started a bus rapid transit service along future C-Train routes. The bus rapid transit routes have less stops than other routes, and use articulated buses as of 2007.

Below are the costs of using Calgary Transit as of March, 2011.

All content from Kiddle encyclopedia articles (including the article images and facts) can be freely used under Attribution-ShareAlike license, unless stated otherwise. Cite this article:
Calgary Transit Facts for Kids. Kiddle Encyclopedia.