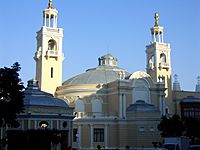 A different view of the Azerbaijan State Philharmonic Hall.

The Azerbaijan State Philharmonic Hall was built between the years 1910–1912 at the request of the city elite and is designed in the Italian Renaissance (outside) and German Rococo (inside) architectural styles. Its design was influenced by the architectural style of the buildings of the Monte-Carlo Casino, particularly the Opéra de Monte-Carlo. The building was originally organized as a club for the wealthy of Baku, who attended it for banquets and entertainment. During the Russian Civil War it was a place for public rallies. In 1936, the club was officially reorganized into a residence for the philharmonic society aimed at promoting Azerbaijani classical and folk music. On 11 August 1937 after the building was renovated, it was named after the Azerbaijani composer Muslim Magomayev. In 1995, the hall was closed down for more than 8 years for another renovation. It was not until November 2002 that the restoration works finally started due to President Heydar Aliyev's special decree. The opening of the fully renovated building happened on 27 January 2004.

The main building has two halls: The Summer Hall with 1100 seats and the Winter Hall with 610 seats, which are joined by a single stage. The Azerbaijan State Philharmonic Hall is home to 7 performing groups:

All content from Kiddle encyclopedia articles (including the article images and facts) can be freely used under Attribution-ShareAlike license, unless stated otherwise. Cite this article:
Azerbaijan State Philharmonic Hall Facts for Kids. Kiddle Encyclopedia.