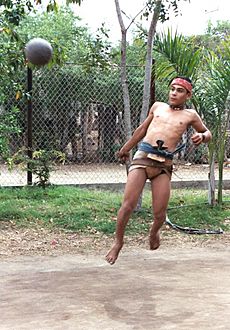 A modern Sinaloa ulama player. The outfit is similar to that worn by Aztec players.

The Mesoamerican ball game is a sport that people in Mesoamerica have played since about 1,400 B.C.E. It was the first team sport in history, as far as historians know.

The Olmecs, who lived from 1,200 B.C.E. to 400 B.C.E., played the Mesoamerican ballgame. They may have created the game. The ancient Mayans played the game; they called it pitz in Classical Maya. Later, the Aztecs played it; in their language, Nahuatl, they called the game ōllamaliztli.

The game's goal was to shoot a ball through a stone hoop about 35 inches (89 centimetres) wide. The ball, called an ulli, was made out of rubber. It weighed about 9 pounds (4.1 kilograms), about as much as a brick. The court, called a tlachtili, was around 100 to 200 feet (30 to 61 metres) long. It had a wall on each side. The stone hoops hung on these walls.

The court was usually in the shape of an “I,” although the shape was sometimes different. A line ran down the center of the court. From that line, the floor sloped to meet the walls.

The players were only allowed to use their heads, elbows, legs, and hips to hit the ball. The ball was not allowed to touch the ground, so the players often dove to avoid losing points. If one of the teams got the ball through the stone hoop, the game was over and that team won. However, this was very hard to do, since the stone hoops could be as high as 20 feet (6.1 metres) off the ground. Since getting the ball through the hoop was uncommon, a team could also score points by hitting one of six markers alongside the edges of the court.

The Mesoamerican ballgame also held a very important religious meaning. In Aztec culture, for example, the game was meant to represent the combat that happened every day on the "ball court" in the underworld, where the sun fought with the night to get across.p.173

In modern times, the Aztec ballgame changed into ulama. People still play this game in a few communities in the Mexican state of Sinaloa.

Ulama uses temporary courts, made by drawing thick lines in the dirt. There are three different ways to play ulama. In the different versions of the game, players may use their hips, forearms, or paddles to hit the ball.

All content from Kiddle encyclopedia articles (including the article images and facts) can be freely used under Attribution-ShareAlike license, unless stated otherwise. Cite this article:
Mesoamerican ball game Facts for Kids. Kiddle Encyclopedia.