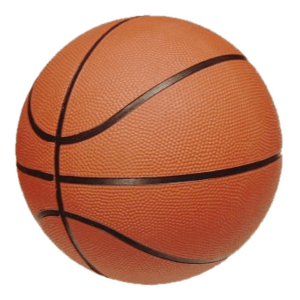 A basketball is a spherical ball used in basketball games. Basketballs usually range in size from very small promotional items that are only a few inches (some centimeters) in diameter to extra large balls nearly 2 feet (60 cm) in diameter used in training exercises. For example, a youth basketball could be 27 inches (69 cm) in circumference, while a National Collegiate Athletic Association (NCAA) men's ball would be a maximum of 30 inches (76 cm) and an NCAA women's ball would be a maximum of 29 inches (74 cm). The standard for a basketball in the National Basketball Association (NBA) is 29.5 inches (75 cm) in circumference and for the Women's National Basketball Association (WNBA), a maximum circumference of 29 inches (74 cm). High school and junior leagues normally use NCAA, NBA or WNBA sized balls.

Aside from the court and the baskets, the basketball is the only piece of equipment necessary to play the game of basketball. During the game, the ball must be bounced continuously (dribbling), thrown through the air to other players (passing) or thrown towards the basket (shooting). Therefore, the ball must be very durable and easy to hold on to. The ball is also used to perform tricks (sometimes called freestyling), the most common of which are spinning the ball on the tip of one's index finger, dribbling in complex patterns, rolling the ball over one's shoulder, or performing aerobatic maneuvers with the ball while executing a slam dunk, most notably in the context of a slam dunk contest.

Nearly all basketballs have an inflatable inner rubber bladder, generally wrapped in layers of fiber and then covered with a surface made either from leather (traditional), rubber, or a synthetic composite. As in most inflatable balls, there is a small opening that allows the pressure to be increased or decreased.

The surface of the ball is nearly always divided by "ribs" that are recessed below the surface of the ball in a variety of configurations and are generally a contrasting color. An orangish surface with black ribs and a possible logo is the traditional color scheme of basketballs but they are sold in various colors. Most famous of these variations, a red/white/blue basketball, was used for the American Basketball Association, the Harlem Globetrotters, and as the "money ball" in the NBA All-Star Weekend's Three Point Contest.

Balls are generally designated for indoor (generally made of leather or absorbent composites), or all-surface use (generally made of rubber or durable composites, also known as indoor/outdoor balls). Indoor balls tend to be more expensive than all-surface balls due to the cost of materials. In addition, brand new all-leather indoor balls must be "broken in" first to achieve optimal grip before use in competition. The abrasiveness of asphalt and the dirt and moisture present in an outdoor setting will usually ruin an indoor ball within a very short period of time, which is why an indoor/outdoor ball is recommended for recreational players. Outdoor balls are usually called outdoor rubber basketballs & they are commonly made from rubber to cope with rougher conditions, and they need to be filled with more air to retain a suitable level of air pressure in colder weather.

Different sizes are used for different age groups. The common standards are:

Note that the ball used for all competitions (men's, women's, and mixed) in the formalized halfcourt game of 3x3 combines characteristics of the size 6 and size 7 balls. Its circumference is that of a size 6 ball, but its weight is that of a size 7.

All content from Kiddle encyclopedia articles (including the article images and facts) can be freely used under Attribution-ShareAlike license, unless stated otherwise. Cite this article:
Basketball (ball) Facts for Kids. Kiddle Encyclopedia.