Kids Encyclopedia Facts
For the film, see Streetballers.
For other ball games played on the street, see Street games. 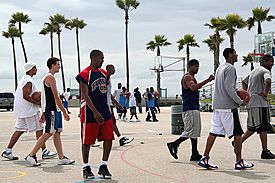 Streetball (or street basketball) is a variation of basketball, typically played on outdoor courts and featuring significantly less formal structure and enforcement of the game's rules. As such, its format is more conducive to allowing players to publicly showcase their own individual skills. Streetball may also refer to other urban sports played on asphalt. It is particularly popular and important in New York City.

Some places and cities in the United States have organized streetball programs, operated similarly to midnight basketball programs. Many cities also host their own weekend-long streetball tournaments, with Hoop-It-Up and the Houston Rockets' Blacktop Battle being two of the most popular. Since the mid-2000s, streetball has seen an increase in media exposure through television shows such as ESPN's ,Street Basketball' and City Slam, as well as traveling exhibitions such as the AND1 Mixtape Tour, YPA, and Ball4Real.

It is also popular in other countries like Philippines. Most of their streets have their own basketball court. Tournaments are also organized especially during summer and holiday season. Divisions are divided into 4 brackets, Mosquito (ages 7 to 13), Midget (ages 14 to 17), Junior (ages 18 to 25), and Senior division (ages 26 and up). 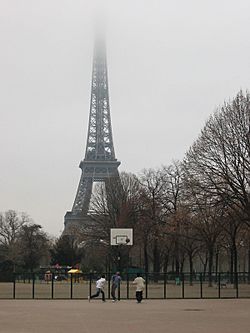 No referees are employed, so almost invariably a "call your own foul" rule is in effect, and a player who believes he has been fouled, simply needs to call out "Foul!", and play will be stopped, with the ball awarded to the fouled player's team (free throws are not awarded in streetball). It is also standard that the hands are considered part of the ball.

Calling fouls is generally disfavored. The etiquette of what rightly constitutes a foul, as well as the permissible amount of protestation against such a call, are the products of individual groups, and of the seriousness of a particular game.

Other violations which are enforced include traveling, double-dribble, carrying, kicking, out of bounds, goaltending, and backcourt violation.

The majority of streetball games are played 3-on-3 on a half court. Special rules have been developed for half-court play:

A common feature of street basketball is the pick up game. To participate in most streetball games around the world, one simply goes to an outdoor court where people are playing, indicates a wish to participate, and from all the players who were at the court before one has played, two players acting as "captains" will get to pick their team out of the players available and play a game. Generally, the team captains alternate their choices, but different courts have differing rules in regards to player selection. Many games play up to 7, 11, 13, 15, or 21 points with the scoring system of 2-point baskets and 3-point baskets counting for 1 and 2 points respectively. It is possible to do (1's only), (2's only), (1's and 2's), or (2's and 3's). Players often play "win by 1" or "win by 2" as in tennis to win the game.

The most common streetball game played is 3-on-3 half court, even though 4-on-4 or 5-on-5 can be played at full court. In most instances, the winning team gets first possession and usually choose which direction (which basket) they get to use.

Another possible streetball feature is having an MC call the game. The MC is on the court during the game and is often very close to the players (but makes an effort to not interfere with the game) and uses a microphone to provide game commentary for the fans.

Special rules have been developed for one-on-one play:

A popular variation of street basketball is 21, also known as Hustle, American, St. Mary's, V or Varsity, Roughhouse, 33, 50 or Crunch, or "New York." 21 is played most often with 3–5 players on a half court. However it is possible to play "21" with only two players or more.

Further, in some forms, players can freely enter the game after it has begun, starting at zero points or being "spotted" the same number as the player with the lowest score. "21" is an "every player for himself" game, with highly variable rules. The rules of "21" are usually agreed by the players at the beginning of the game.

"21" is considered a very challenging game, especially because the offensive player must possibly go up against several defenders at the same time. For this reason, it is exceedingly difficult to "drive to the hole" and make lay-ups in "21." Therefore, and also because of the emphasis on free-throws, "21" is very much a shooter's game, and because a successful shot means you keep the ball, it is possible for there to be come-backs when a player recovers from a large deficit by not missing any shots (this can also result in failure when they miss their final free-throw at 20 points and revert to 13 or 15). "21" is popular because it allows an odd number of people to play, unlike regular basketball or other variants.

King of the Court

King of the Court" or "Boston" is another less common streetball variant, often referred to results in essentially a one-on-one (or sometimes two-on-two) tournament between any number of players. Each match is played by the normal one-on-one rules, including violations (such as fouls and out-of-bounds) to just one point. The winner remains on the court and gets to take the ball out while the loser returns to the end of the line of players waiting to step on the court. The first player to win a set number of matches (usually 5, 7, or 11) wins the game. Each player can only take one shot per turn.

H-O-R-S-E is a game played by two or more people on a basketball court. The goal of the game involves matching baskets. The player who makes more shots that the opponent can't duplicate, wins the game. For example: The second person shooting must match the first person's shot if it is made. If the second shooter misses, he or she receives the letter H. If the first person shot is missed, the second shooter may attempt any shot. The game continues until one person accumulates 5 letters of H-O-R-S-E.

Around the World (sometimes called Around the Key) is a basketball variant played by two or more players, who have all agreed upon a turn order. The game requires a sequence of shooting positions to be decided upon. The objective is to be the first player to make a shot from all positions. When a player makes a successful shot from the final position, the game enters the final stage with positions are around the key or even under the basket is declared the winner. Others play such that those players who have yet to act on the turn get a chance to tie, which cancels any advantage of going first.

In theory, the shooting positions are arbitrary; in practice, they are most commonly ordered along the 3-point line in equal intervals starting from one of the sides of the basket and including the straight-on center shot (0°, 30°, 60°, 90°, 120°, 150°, and 180°). This 180-degree semi-circular path is the inspiration for the game's name.

Making a shot from a position allows a player to advance to the next position. The rules are very flexible but usually a player keeps advancing until a missed shot. The consequences of missing a shot may vary. Sometimes the game is played such that a missed shot requires the player to start over at the first position. Under this rule, the game may also include another rule that allows a player to "save" their position, and pass the ball to the next player. It is probably most common, however, to play such that each player continues until a missed shot. At this point a player may save his position or elect to take another "chance" shot. If the chance shot is made, the player advances as normal. If it misses, the player's turn ends and they suffer some penalty, perhaps regressing a position or even starting over.

Other variations of basketball

All content from Kiddle encyclopedia articles (including the article images and facts) can be freely used under Attribution-ShareAlike license, unless stated otherwise. Cite this article:
Streetball Facts for Kids. Kiddle Encyclopedia.