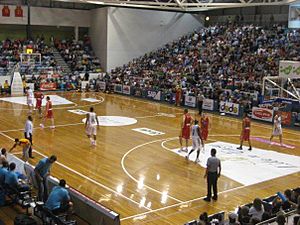 The National Basketball League is a basketball competition in Australasia. It's current sponsor is iiNet, so it is also known as the iiNet NBL Championship. It is the top-level basketball competition in Australasia. The Singapore Slingers once played in this league, meaning it is the first Australasian sporting league ever to have a team from Asia. The league started in 1979, and its most successful time is during the 1980s and 1990s. However, it started to struggle in the 20th century. At the start of the 2004/05 season the league had a deal with Fox Sports of Australia. On September 18, 2007, the National Basketball League had Hummer as their sponsor. one HD started broadcasting in 2010, the first time a game has been on TV for eight years.

The All-Star game is an event of the NBL held every year. At first it was fought between the East and West, but now it is contested between the Aussies and the World.

All content from Kiddle encyclopedia articles (including the article images and facts) can be freely used under Attribution-ShareAlike license, unless stated otherwise. Cite this article:
National Basketball League (Australasia) Facts for Kids. Kiddle Encyclopedia.