Perth Arena (known commercially as RAC Arena) is a neofuturistic entertainment and sporting arena in the city centre of Perth, Western Australia, used mostly for basketball matches. It is located on Wellington Street near the site of the former Perth Entertainment Centre, and was officially opened on 10 November 2012. The Perth Arena is the first stage of the Perth City Link, a 13.5 hectare major urban renewal and redevelopment project which involves the sinking of the Fremantle railway line to link the Perth central business district directly with Northbridge.

The arena was jointly designed by architectural firms Ashton Raggatt McDougall and Cameron Chisholm Nicol. With its design based on the Eternity puzzle, the venue holds up to 13,910 spectators for tennis events, 14,846 for basketball (the arena's capacity is capped at 13,000 for National Basketball League regular season games) and a maximum of 15,000 for music or rock concerts. The venue has a retractable roof, 36 luxury appointed corporate suites, a 680-bay underground car park, 5 dedicated function spaces, and touring trucks can drive directly onto the arena floor.

It is owned by VenuesWest (which operates HBF Stadium, HBF Arena, Bendat Basketball Centre, and others) on behalf of The State Government of Western Australia and is managed by AEG Ogden.

Anchor tenants of Perth Arena include the West Coast Fever, Perth Wildcats and the Hopman Cup. 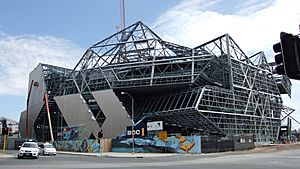 The arena under construction in February 2011, with underlying steel framework visible

The tender for the project was won by Western Australian construction consortium BGC, and work commenced on the site in June 2007.

The construction was marred by controversy in relation to the cost and time blowouts from the original $150 million estimate to $550 million. Auditor General Colin Murphy reported in 2010 that "The initial estimates of the cost and opening date for the Arena were unrealistic and made before the project was well understood or defined." An example of the modifications to the original Arena design is the change of the carpark location from being built above the nearby railway line as a separate project to underneath the Arena itself.

For the first six years of operation, Perth Arena retained its non-commercial name. In September 2018, the venue name was changed to RAC Arena. The Royal Automobile Club of Western Australia (RAC) agreed to a five year naming rights arrangement, with the deal estimated to be worth about $10 million to the West Australian Government. Prior to the name change, the West Australian Government had paid around $8 million to stadium operator AEG Ogden as compensation for not being able to sell the naming rights. 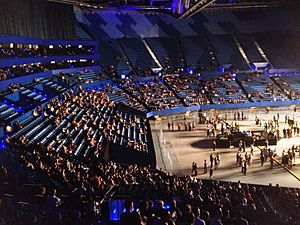 Inside Perth Arena at "Plug Into Perth" concert, 2 November 2012

The Perth Arena hosted its first National Basketball League game on 16 November 2012 when the Perth Wildcats played (and lost to) the Adelaide 36ers in front of a crowd of 11,562. The attendance was the largest recorded in Western Australia for an indoor event, breaking the previous record of 8,501 set at the Burswood Dome in 2004. The arena has since hosted larger crowds, with the current record being 13,611 set during the Wildcats 95-84 loss to the Adelaide 36ers in a top of the table clash on 14 January 2017 during Round 15 of the 2016–17 NBL season.

On 2 January 2019, a record crowd of 14,064 attended the venue for the 2019 Hopman Cup match between United States and Switzerland. This was also the highest attendance for a tennis match in Western Australian history. The stadium hosted the Hopman Cup until the tournament’s disbandment. It was chosen by Tennis Australia to host the 2019 Fed Cup Final between Australia and France. Since 2020 the arena has been one of three Australian venues to host ties in the multi-nation ATP Cup tournament.

Netball was first played at the arena on 27 April 2013, when home team the West Coast Fever lost 49-58 to the Melbourne Vixens in the ANZ Championship. The Fever continued to play occasional matches at the venue over several years, sharing fixtures with the smaller Perth Superdrome. Ahead of the 2018 season the club shifted all home matches to Perth Arena. The crowd of 13,722 at the 2018 Super Netball Grand Final was a domestic league record.

The first international netball test was played at Perth Arena on 30 October 2015 between Australia and New Zealand in the final test of the Constellation Cup.

All content from Kiddle encyclopedia articles (including the article images and facts) can be freely used under Attribution-ShareAlike license, unless stated otherwise. Cite this article:
Perth Arena Facts for Kids. Kiddle Encyclopedia.