Charles III (1361 – 8 September 1425), called the Noble, was King of Navarre from 1387 to his death and Count of Évreux from 1387 to 1404, when he exchanged it for the title Duke of Nemours. He spent his reign improving the infrastructure of his kingdom, restoring Navarre's pride after the dismal reign of his father, Charles the Bad, and mending strained relations with France.

Charles III was born at Mantes-la-Jolie, the son of Charles II of Navarre and Joan of Valois. He married Eleanor, daughter of Henry II of Castile, in 1375, putting an end to the conflict between Castile and Navarre.

On 25 July 1390, Charles named Joanna as his heir to Navarre. Yet in 1397 his son, Charles, would be recognized as heir to Navarre. As king, his politics were peace with France, Castile, Aragon, and England, support for the Avignon Papacy, and matrimonial alliance. He collaborated with Castile in a war on the Kingdom of Granada. By the Treaty of Paris, he abandoned his claims to Champagne and Brie and made peace with France.

Charles created the title Prince of Viana for the heir to the throne, entitling his grandson Charles in 1423. He was a patron of the arts and he finished construction on the great Gothic Cathedral of Pamplona. When it comes to Navarre's home policy, he decreed the watershed unification of Pamplona's boroughs in 1423, after over three centuries of division and rivalry. He also built the royal palace at Tafalla and the Royal Palace of Olite, where he died in 1425. 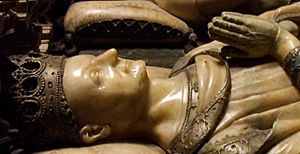 Tomb of Charles III in the Cathedral of Pamplona.

Charles and Eleanor's children were:

All content from Kiddle encyclopedia articles (including the article images and facts) can be freely used under Attribution-ShareAlike license, unless stated otherwise. Cite this article:
Charles III of Navarre Facts for Kids. Kiddle Encyclopedia.