Wildlife of Spain facts for kids 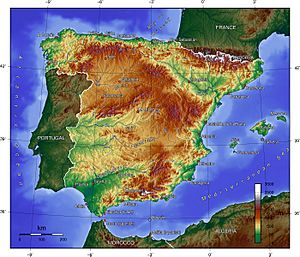 The wildlife of Spain includes the diverse flora and fauna of Spain. The country has a long coastline on the Atlantic Ocean and another on the Mediterranean Sea, and its territory includes the Canary Islands, the Balearic Islands and two enclaves in North Africa, Ceuta and Melilla. The country has many endemic species, especially those restricted to the island groups. The habitats include mountains, hills, forests, rivers, lakes, coasts, grassland and cultivated land.

Spain is part of the Iberian Peninsula in southwestern Europe, and it is situated to the east of Portugal and to the south of France and the Pyrenees. It has a long coastline along the Atlantic Ocean, another along the Mediterranean Sea and it includes the Canary Islands in the Atlantic and the Balearic Islands in the Mediterranean. Peninsular Spain largely consists of a highland plateau, surrounded and dissected by mountain ranges. The main lowland regions are the Ebro Basin in the northeast, the Andalusian Plain in the southwest, the basins of the Tagus and the Guadiana in the west and the narrow coastal plains.

Much of the country experiences a Mediterranean climate with warm or hot, dry summers and the rainfall falling in winter. A semi-arid climate occurs in the southeastern part of Spain, but is also found elsewhere in the country such as the Ebro basin. Here the summers are hot and the winters cool, but there is limited precipitation at any time of year. The northern part of the country experiences an oceanic climate, with both winter and summer temperatures influenced by the proximity to the Atlantic Ocean and rainfall spread throughout the year. The Balearic Islands have a Mediterranean climate, and the Canary Islands are influenced by their oceanic surroundings and proximity to Africa.

Amongst European countries, Spain has one of the highest degrees of biodiversity; this is because of its four varied, major biogeographic regions, Atlantic, Alpine, Mediterranean and Macaronesian, and the country is considered to be one of the world's biodiversity hotspots. In connection with Natura 2000, a European Union initiative, 27% of the country is included in national parks, wildlife reserves and other protected areas. 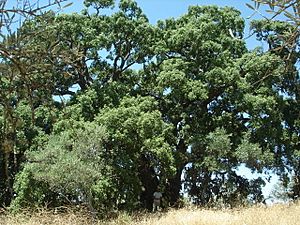 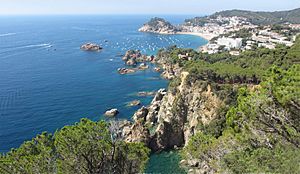 The Mediterranean coast of Spain

Including the mainland and the island groups, Spain has eight to nine thousand species of vascular plants, more than any other country in Europe. Between 20 and 25% of these are endemic to the country and a higher proportion of these are threatened than in any other European country. Although there are no endemic plant families mainland Spain has 822 endemic species, and the Balearic Islands 103.

Most of the plateaus, valleys and plains of the interior used to be clad in sclerophyllous and semi-deciduous forests. These were dominated by holm oak and cork oak, with wild olive and carob in the south, but only remnants of this natural vegetation remain. Much of this terrain is now covered with dense shrubland known as maquis, with scattered low trees, bushes and herbaceous plants. Stone pine and maritime pine are dominant on sandy soils, and Aleppo pine, Kermes oak and juniper in limestone areas.

At higher altitudes, the Pyrenean oak is dominant up to about 1,500 m (5,000 ft) above which Scots pine and juniper take over. In the river valleys, only remnants remain of the natural deciduous woodland of willow, poplar, alder, ash and elm. The coastal part of northwestern Spain has plentiful deciduous forests dominated by common oak, lime, chestnut, elm, ash, maple and hazel, and where the tree cover is lacking, heather and gorse. Some parts in the southeast of the country have a form of subtropoical steppe vegetation. 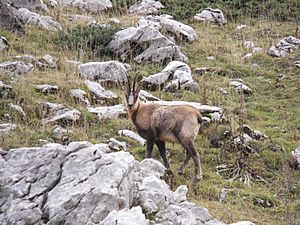 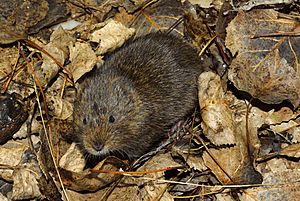 Including the mainland and the island groups, Spain has an estimated sixty to seventy thousand species of animal. Of these, about seven hundred are vertebrates (excluding marine fish) and the remainder are invertebrates. The highest degree of endemism occurs among freshwater fish and in the mountainous areas, the coastal areas, and among the Canary Island fauna. About 30% of the vertebrates in Spain are threatened. 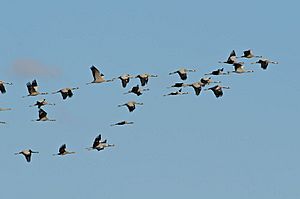 Common cranes flying over Castilla during their winter migration 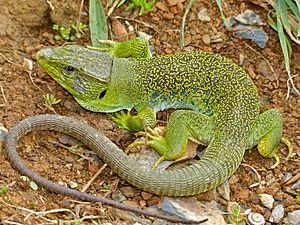 With its varied habitats, Spain has a large number of bird species, 644 having been recorded, seven of which are endemic. The endemic species are restricted to the offshore islands and include Bolle's pigeon, laurel pigeon, Canary Islands oystercatcher (extinct), Canary Islands chiffchaff, Balearic warbler, Canary Islands stonechat and Tenerife blue chaffinch. Besides the large number of resident bird species, Spain is visited in spring and autumn by many migratory birds, travelling between their over-wintering grounds in Africa and their breeding grounds in northern Europe.

The rivers and lakes harbour various relict freshwater fish, including the endemic Spanish minnowcarp and Luciobarbus microcephalus, and among reptiles, the Caspian turtle and European pond turtle. Other reptiles include Hermann's tortoise, Greek tortoise and pond slider, as well as four species of sea turtle. Also recorded in Spain are the common chameleon and about sixty species of lizard, worm lizard, gecko and skink, many being endemic to the Canary Islands and Balearics, and some occurring in the Spanish enclaves in North Africa. Sixteen species of snake are similarly listed for Spain.

All content from Kiddle encyclopedia articles (including the article images and facts) can be freely used under Attribution-ShareAlike license, unless stated otherwise. Cite this article:
Wildlife of Spain Facts for Kids. Kiddle Encyclopedia.