The Greek tortoise's geographic range includes North Africa, Southern Europe, and Southwest Asia. It is prevalent in the Black Sea coast of the Caucasus (from Anapa, Russia, to Sukhumi, Abkhazia, Georgia, to the south), as well as in other regions of Georgia, Armenia, Iran, and Azerbaijan.

The oldest known definitive fossil is from the Early Pliocene of Greece, but specimens referred to as Testudo cf. graeca are known from the Late and Middle Miocene in Greece and Turkey.

The Greek tortoise (T. g. ibera) is often confused with Hermann's tortoise (T. hermanni ). However, notable differences enable them to be distinguished. 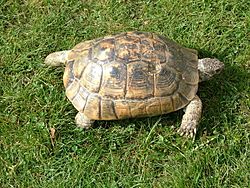 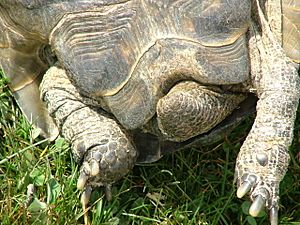 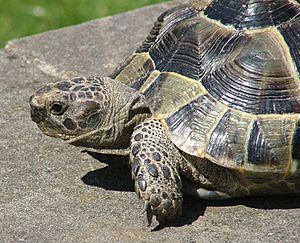 The division of the Greek tortoise into subspecies is difficult and confusing. Given their huge range over three continents, the various terrains, climates, and biotopes have produced a huge number of varieties, with new subspecies constantly being discovered. Currently, at least 20 subspecies are published:

This incomplete listing shows the problems in the division of the species into subspecies. The differences in form are primarily in size and weight, as well as coloration, which ranges from dark brown to bright yellow, and the types of flecks, ranging from solid colors to many spots. Also, the bending-up of the edges of their carapaces ranges from minimal to pronounced. So as not to become lost in the number of subspecies, recently, a few tortoises previously classified as T. graeca have been assigned to different species, or even different genera.

The genetic richness of T. graeca is also shown in its crossbreeding. Tortoises of different form groups often mate, producing offspring with widely differing shapes and color. Perhaps the best means of identification for the future is simply the place of origin.

The smallest, and perhaps the prettiest, of the subspecies, is the Tunisian tortoise. It has a particularly bright and striking coloration. However, these are also the most sensitive tortoises of the species, so they cannot be kept outdoors in temperate climates, as cold and rainy summers quickly cause the animals to become ill. They are also incapable of long hibernation.

At the other extreme, animals from northeastern Turkey are very robust, such as Hermann's tortoise. The largest specimens come from Bulgaria. Specimens of 7 kg (15 lb) have been reported. In comparison, the Tunisian tortoise has a maximum weight of 0.7 kg (1.5 lb). T. graeca is also closely related to the marginated tortoise (T. marginata). The two species can interbreed, producing offspring capable of reproduction.

Males of T. graeca differ from females in six main points. Firstly, they are generally smaller. Their tails are longer than females and taper to a point evenly, and the cloacal opening is farther from the base of the tail. The underside is somewhat curved, while females have a flat shell on the underside. The rear portion of a male's carapace is wider than it is long. Finally, the posterior plates of the carapace often flange outward. 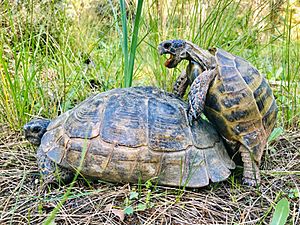 In T. graeca, immediately after waking from hibernation, the mating instinct starts up. The males follow the females with great interest, encircling them, biting them in the limbs.

One or two weeks before egg laying, the animals become notably agitated, moving around to smell and dig in the soil, even tasting it, before choosing the ideal spot to lay the eggs.

The Greek tortoise is commonly traded as a pet in source countries such as Morocco and Spain, despite the illegality of this trade. This can lead to an unsustainable removal of wild individuals for the local pet trade and for export. Also, welfare concerns exist with this trade, as the animals are not properly housed when being sold, causing a high rate of mortality in captivity.

The Greek tortoise loves dandelion leaves and other leafy plants. However, although they also enjoy eating lettuce, it is not recommended to them due to having a lack of nutrients that the tortoises need to survive.

All content from Kiddle encyclopedia articles (including the article images and facts) can be freely used under Attribution-ShareAlike license, unless stated otherwise. Cite this article:
Greek tortoise Facts for Kids. Kiddle Encyclopedia.