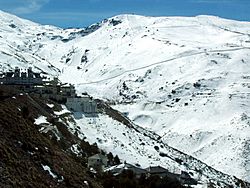 The Sierra Nevada, meaning "snowy range" in Spanish, is a mountain range in the region of Andalusia in Spain. It contains the highest point of continental Spain, Mulhacén at 3,479 m.

It is a popular tourist destination, as its high peaks make skiing possible in Europe's most southern ski resort after Ski Centre on the island of Crete in an area along the Mediterranean Sea predominantly known for its warm temperatures and abundant sunshine. At its foothills is found the city of Granada and, a little farther, Málaga and Almería.

All content from Kiddle encyclopedia articles (including the article images and facts) can be freely used under Attribution-ShareAlike license, unless stated otherwise. Cite this article:
Sierra Nevada (Spain) Facts for Kids. Kiddle Encyclopedia.