Province of Almería facts for kids

Almería ( also) is a province of the Autonomous Community of Andalusia, Spain. It is bordered by the provinces of Granada, Murcia, and the Mediterranean Sea. Its capital is the homonymous city of Almería. 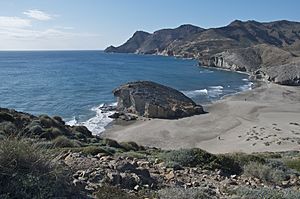 The highest mountain range in the Province of Almería is the 50 km long Sierra de Los Filabres.

Europe's driest area is found in Almería and is part of the Cabo de Gata-Níjar Natural Park. The arid landscape and climate of the province have made it an ideal setting for Western films, especially during the 1960s. Because of the demand for these locations, quite a number of Western towns were built near the Tabernas Desert. Films such as A Fistful of Dollars, For a Few Dollars More, and The Good, The Bad, and The Ugly were shot here. Years later the film of 800 Bullets was filmed in the same place. Large sections of Conan the Barbarian (1982 film), Indiana Jones and the Last Crusade, Lawrence of Arabia and Patton were shot there as well.

The main river is the Andarax River, which is located near Granada in the Alpujarras. The Beninar Reservoir, located near Darrical, provides part of the water needed in the production in greenhouses.

Interesting and unique species of animals native to the Alto Almanzora are in the process of extinction.

The most important economic activity is greenhouse farming. Millions of tons of vegetables are exported to other European countries and other parts of the world each year. see Intensive farming in Almería

Tourism is also a key sector of the economy, due to the sunny weather and attractive areas such as Roquetas de Mar, Aguadulce, Almerimar, Mojacar, Vera or Cabo de Gata.

The principal industrial activity is in the Macael (Comarca del Marmol) canteras marble quarrying area in the Sierra de los Filabres region from Macael Viejo to Chercos, Lijar and Cobdar which produce in excess of 1.3 million tons. The Cantoria, Fines, Olula del Rio and Purchena area of the Alto Almanzora valley is fast becoming the regional megalopolis through high imports and exports and employment in local, national and international marble processing. All the tourist accommodations and construction throughout coastal Spain has driven high demand and brought huge modernisation. Small pueblos of agriculturalists have given rise to computerised machining factories.

The German-Spanish Calar Alto Observatory is one of the most important observatories of Spain.

In Tabernas there is a solar energy research centre, the Plataforma Solar de Almería (PSA).

All content from Kiddle encyclopedia articles (including the article images and facts) can be freely used under Attribution-ShareAlike license, unless stated otherwise. Cite this article:
Province of Almería Facts for Kids. Kiddle Encyclopedia.