City of Arts and Sciences facts for kids 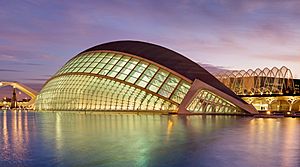 The City of Arts and Sciences (Catalan: Ciutat de les Arts i les Ciències; Spanish: Ciudad de las Artes y las Ciencias) is an entertainment-based cultural and architectural complex in the city of Valencia, Spain. It is the most important modern tourist place in the city of Valencia. It is one of the 12 Treasures of Spain.

The City of Arts and Sciences is situated at the end of the former riverbed of the river Turia, which was drained and rerouted after a catastrophic flood in 1957. The old riverbed was turned into a picturesque sunken park.

The project began the first stages of construction in July 1996, and was inaugurated April 16, 1998 with the opening of L'Hemisfèric. The last great component of the City of Arts and Sciences, El Palau de les Arts Reina Sofia, was inaugurated on October 9, 2005, Valencian Community Day. It has cost nearly three times the initial expected cost.

The complex is made up of the following buildings, in order of their inauguration: 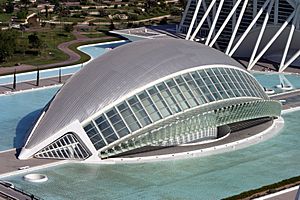 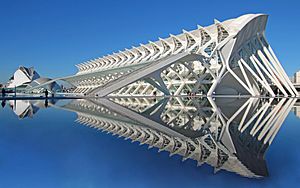 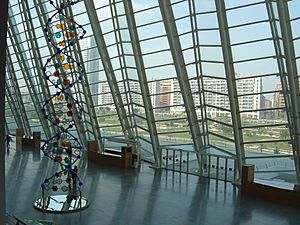 The building is used for exhibitions. The first floor has a view of the Turia Garden that surrounds it; which is over 13,500 square meters of water. The second floor hosts “The Legacy of Science” exhibition. The third floor is known as the “Chromosome Forest” which shows the sequencing of human DNA. Also on this floor is the “Zero Gravity,” the “Space Academy,” and “Marvel Superheroes” exhibitions.

The building’s architecture is known for its geometry, structure, use of materials, and its design around nature. The building is currently the largest in Spain. This magnificent building stands 220 meters long, 80 meters wide and 55 meters high. 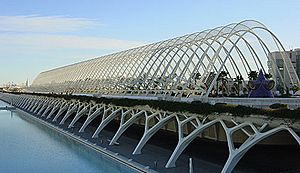 L'Umbracle, built over a car park 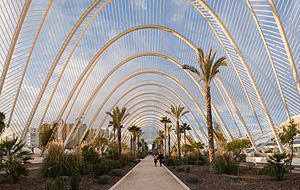 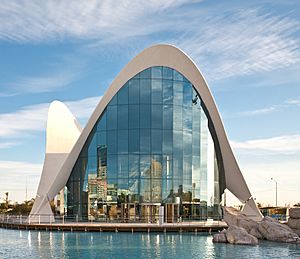 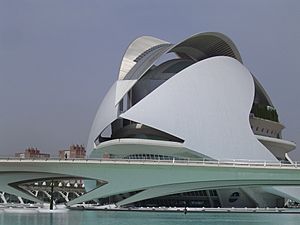 Some portions of the area were featured in the 2013 racing game Gran Turismo 6 as a photo location. Exterior scenes in the futuristic city in the 2015 film Tomorrowland were filmed around the City of Arts and Sciences. In 2016 it was also used as a filming location in the sci-fi series Doctor Who, appearing in the second episode of the tenth series.

All content from Kiddle encyclopedia articles (including the article images and facts) can be freely used under Attribution-ShareAlike license, unless stated otherwise. Cite this article:
City of Arts and Sciences Facts for Kids. Kiddle Encyclopedia.