An aeolipile or Hero's Engine, is a simple kind of steam engine believed to have been invented by Hero of Alexandria in the 1st century AD. It may have been the first steam engine made. 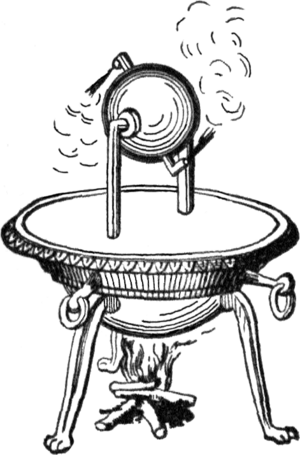 Drawing of an aeolipile

Its name comes from the Greek word Αἴολος and latin word pila, it means "The ball of Aeolus." Aeolus is the ancient Greek god of air and wind.

A ball is free to rotate on a hinge, 2 or 4 L-shaped nozzles stick out of the ball, the ball is to be filled with water, and a source of heat (such as fire) is placed underneath the ball, as the water gets hot, it turns to steam that forces its way out of the nozzles, pushing the ball around, therefore, the aeolipile is a kind of reaction turbine, and the nozzles use a similar principle to rockets.

No one really knows if the aeolipile was used for anything in ancient times. In modern times, they are used to teach physics and how steam engines work.

All content from Kiddle encyclopedia articles (including the article images and facts) can be freely used under Attribution-ShareAlike license, unless stated otherwise. Cite this article:
Aeolipile Facts for Kids. Kiddle Encyclopedia.