Hummelstown is a borough in Dauphin County, Pennsylvania, United States. The population was 4,538 as of the 2010 census. It is part of the Harrisburg–Carlisle Metropolitan Statistical Area.

Originally named Fredrickstown, the town was established in 1762. The current mayor is David Roeting. Hummelstown is a Tree City and is located in District 15 of the Pennsylvania State Senate. It is centrally located between Harrisburg and Hershey, making it a common tourist drive-through. It has several businesses and shops designed to capitalize on the tourist travel that passes through town. 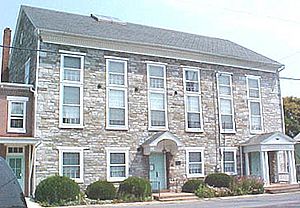 Hummelstown was founded as "Fredrickstown" in 1762 by two Germans, Frederick and Rosina Hummel. They purchased the land for 200 pounds sterling, then divided the area into building lots, which were sold to German settlers. During the mid 19th century, the Union Canal along Swatara Creek was an important factor in the development of the local economy, promoting trade and transportation.

The town was located on the Berks-Dauphin Turnpike, and later it was served by the Union Canal which paralleled Swatara Creek bordering the north and the west sides of the town, and was opened in 1827. The Lebanon Valley Railroad arrived in 1858. This brought about many jobs of stone cutting and shipyard work and helped facilitate the Hummelstown Brownstone Company which became the leading employer of Hummelstown residents. The company mined Hummelstown brownstone at its quarries from 1867 until 1929. The company was the largest producer of brownstone on the East Coast.

Throughout the history of the town it has been a stopping point for tourists traveling to Harrisburg, the capital of Pennsylvania, or to Hershey, the home of Hershey Foods, Hersheypark, and Chocolate World. At various times Hummelstown has been as close as 20 miles (32 km) from up to ten different professional sports teams, such as the Harrisburg Heat, Hershey Bears, Hershey Wildcats, and the Harrisburg City Islanders. The Calder Cup has had several ceremonies conducted in Hummelstown over the years.

The borough celebrated its semiquincentennial or 250-year anniversary in 2012.

The Dr. William Henderson House, Keystone Hotel, Enoch Matlack House, and Zion Lutheran Church and Graveyard are listed on the National Register of Historic Places. The Hummelstown Historical Society building is located at North Rosanna Street and North Alley Street in the original building for the Zion Lutheran Church, which is now the main brownstone church on Main Street of Hummelstown. The society has a library, museum, and genealogy section, and hosts numerous Native American relics, such as arrowheads, bones, and pottery.

Hummelstown is within a thirty-minute drive of several colleges and educational institutions, such as HACC, Lebanon Valley College, Penn State Harrisburg, YTI Career Institute, Kepler Career Institute, and VoTech. Many residents of Hummelstown have jobs in Derry Township, mainly through Hershey Foods and its subsidiaries.

Hummelstown currently has two historical markers in the town, one for the town's oldest church and the other for the Hummelstown Brownstone company. 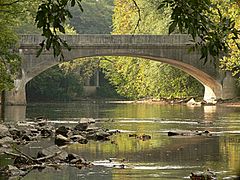 Swatara Creek as seen from a park in Hummelstown, at the west end of town. The bridge supports U.S. 322. 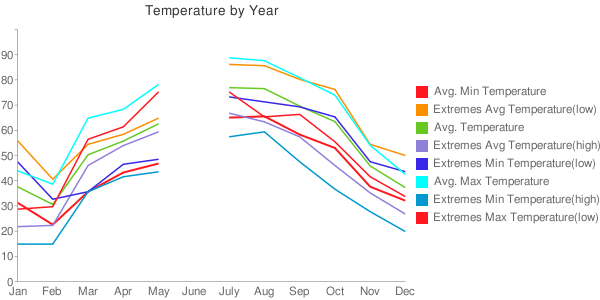 Few tornadoes or hurricanes striking Hummelstown over the years. In 1992 the borough was hit by a bow tornado. In past years the town has been hit by only several hurricanes, the most severe being Hurricane Agnes which knocked out two key bridges in the town.

According to the United States Census Bureau the median house value in Hummelstown is $99,400. Directly within the main limits of the town, excluding those of the development of Graystone, as well as those that have Hummelstown addresses, there is a total of 1,953 housing units.

Hummelstown is home to many older homes; a large number were built in the earlier decades of the 1900s.

According to the United States Census Bureau, the estimated upkeep cost and home improvement costs to percentage of house value in Hummelstown, has a median of less than 15% (which comes to a median cost of $14,910).

Hummelstown has a historical society constructed with Hummelstown brownstone. The Hummelstown Historical Society is both a museum and visitor center. The town is home to a historical landmark, the Warwick Hotel, which is still a tavern reminiscent of its pre-Revolutionary War days. George Washington stayed a night there and drank from its bar.

Indian Echo Caverns, located one-half mile south of the borough limits, is one of the main attractions near Hummelstown. The caverns were originally used by the Susquehannock tribe, who lived and hunted in the nearby area until they vanished in the 1670s; it opened to the public in 1929.

The shortline Middletown and Hummelstown Railroad operates heritage and freight service between its namesake towns of Middletown and just south of Hummelstown proper, stopping in front of the Indian Echo Caverns entrance. The Hummelstown Borough Council has expressed concern around quality of life issues (noise, odor, safety) with having more trains passing through town. As such, trains stop just south of the busy four-lane U.S. Route 322 grade crossing on a regular basis, and are allowed to enter town exactly 12 times per year. Norfolk Southern's busy Harrisburg Line traverses the northern section of Hummelstown, with up to 20 lengthy freight trains passing through daily.

The Hummelstown Chemical Fire Department occasionally serves as a distribution center for Potassium Iodide pills supplied by the Pennsylvania Department of Health. Hummelstown falls within a 10 mile radius of Three Mile Island.

As much of Pennsylvania, in the initial days of its founding, Hummelstown had a large base of Quakers. As the town grew, other Protestant denominations such as Lutheran, Methodist, and Presbyterian developed. 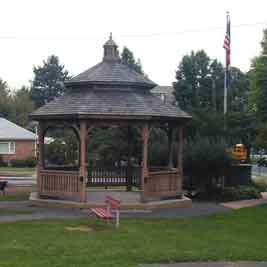 The Pavilion at Herbert A. Schaffner Park

Several parks are located throughout the borough: 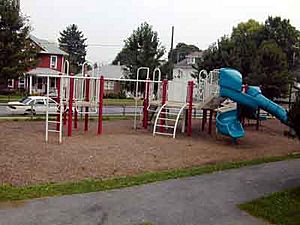 The playground at Schaffner Park, the former Borough Park.

Hummelstown has a rich folklore, both of the town and especially concerning the local area. There is a great history to the area, with its fields, creek, and the caves nearby. The biggest case of folklore around the town is the case of the sister and brother duo of William "Amos" Wilson and Elizabeth "Harriot" Wilson. William would later be known as "the Pennsylvania Hermit". Indian Echo Caverns uses the folklore of William to help attract tourists. 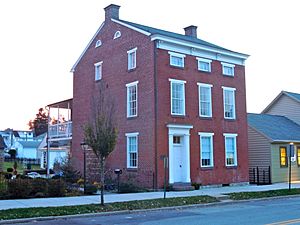 There were several Native American tribes located around Hummelstown, including the Susquehannocks, the Iroquois, and several smaller tribes that would later be conquered or assimilated into the Iroquois. 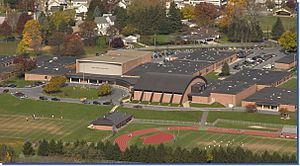 Hummelstown's public library, the William H. and Marion C. Alexander Family Library, named for its major donors and local philanthropists, is located on the corner of 2nd and Railroad Streets.

HUM at a glance:

2,821 square feet of net space
27,456 volumes
Opened in 1953.
Building constructed in 1957 as Hummelstown Teen Center, later Hummelstown Civic Center.
Library moved into building in 1965.
Became part of the Dauphin County Library System in 1975. Library took over entire building in 1983. (This address is the current location of the library but the building info pertains to the former location across from the NYE Elementary School.)

All content from Kiddle encyclopedia articles (including the article images and facts) can be freely used under Attribution-ShareAlike license, unless stated otherwise. Cite this article:
Hummelstown, Pennsylvania Facts for Kids. Kiddle Encyclopedia.