Three Mile Island Nuclear Generating Station (TMI) is a closed nuclear power plant on Three Mile Island in Londonderry Township, Pennsylvania, on the Susquehanna River just south of Harrisburg. It had two separate units, TMI-1 (owned by Exelon Generation) and TMI-2 (owned by FirstEnergy Corp). The plant was the site of the most significant accident in United States commercial nuclear energy when, on March 28, 1979, TMI-2 suffered a partial meltdown. According to the Nuclear Regulatory Commission (NRC) report, the accident resulted in no deaths or injuries to plant workers or in nearby communities. Follow-up epidemiology studies have linked no incidents of cancer to the accident.

The reactor core of TMI-2 has since been removed from the site, but the site has not been decommissioned. In July 1998, Amergen Energy (now Exelon Generation) agreed to purchase TMI-1 from General Public Utilities for $100 million.

Three Mile Island is so named because it is located three miles downriver from Middletown, Pennsylvania. The plant was originally built by General Public Utilities Corporation, later renamed GPU Incorporated. The plant was operated by Metropolitan Edison Company (Met-Ed), a subsidiary of the GPU Energy division. During 2001, GPU Inc. merged with FirstEnergy Corporation.

Exelon was operating Unit 1 at Three Mile Island at a loss since 2015. In 2017 the company said it would consider ceasing operations at Unit 1 because of high costs unless there was government action; it shut down in 2019.

Unit 2, which has been dormant since the accident in 1979, is still owned by FirstEnergy, and it is estimated to close in 2036.

Emergency zones and nearby population

The NRC defines two emergency planning zones around nuclear power plants: a plume exposure pathway zone with a radius of 10 miles (16 km), concerned primarily with exposure to, and inhalation of, airborne radioactive contamination, and an ingestion pathway zone of about 50 miles (80 km), concerned primarily with ingestion of food and liquid contaminated by radioactivity.

The Three Mile Island Unit 1 is a pressurized water reactor designed by Babcock & Wilcox with a net generating capacity of 819 MWe. The initial construction cost for TMI-1 was US$400 million, equal to $1.73 billion in 2018 dollars. Unit 1 first came online on April 19, 1974, and began commercial operations on September 2, 1974. TMI-1 is licensed to operate for 40 years from its first run, and in 2009, was extended 20 years, which means it could have operated until April 19, 2034.

TMI-1 had a closed-cycle cooling system for its main condenser using two natural draft cooling towers. Makeup water was drawn from the river to replace the water lost via evaporation in the towers. Once-through cooling with river water is used for the service water system which cools auxiliary components and removed decay heat when the reactor was shut down. When TMI-2 suffered its accident in 1979, TMI-1 was offline for refueling. It was brought back online in October 1985, after public opposition, several federal court injunctions, and some technical and regulatory complications. 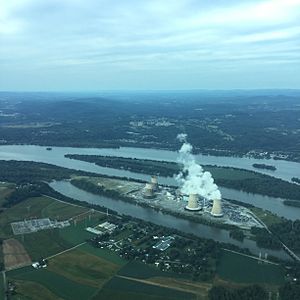 Unit 1 was scheduled to be shut down by September 2019 after Exelon announced they did not receive any commitments for subsidies from the state, rendering Exelon unable to continue operating the reactor. TMI-1 was shut down on September 20, 2019. 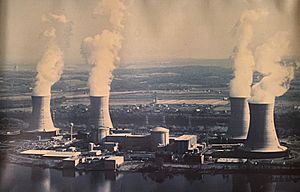 A rare image of both units one and two in operation for the few months that they were. It is estimated that this photo was taken in February 1979. 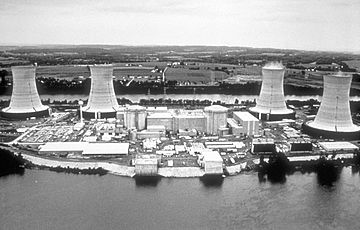 Unit 2 during its time in operation, viewed from the west

The Three Mile Island Unit 2 was also a pressurized water reactor constructed by B&W, similar to Unit 1. The only difference was that TMI-2 was slightly larger with a net generating capacity of 906 MWe, compared to TMI-1, which delivers 819 MWe. Unit 2 received its operating license on February 8, 1978, and began commercial operation on December 30, 1978. TMI Unit 2 has been permanently shut off after the Three Mile Island accident in 1979.

On January 22, 2010, officials at the NRC announced the electrical generator from the damaged Unit 2 reactor at TMI will be used at Shearon Harris Nuclear Plant in New Hill, North Carolina. The generator was transported in two parts, weighing a combined 670 tons. It was refurbished and installed during a refueling outage at Shearon Harris NPP in November 2010. TMI's Unit 2 reactor has been shut down since the partial meltdown in 1979. 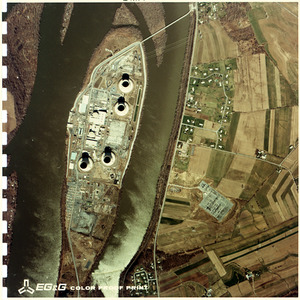 On June 20, 2017, Exelon Generation, the owners of Three Mile Island's Unit 1 sent to the Nuclear Regulatory Commission a formal notice of its intention to shut down the plant on September 30, 2019, unless the Pennsylvania legislature rescues the nuclear industry, which is as of 2017 struggling to compete as newfound natural gas resources have driven down electricity prices. Exelon Generation's Senior Vice President Bryan Hanson noted that once Three Mile Island was closed, it could never be reopened for use again. Hanson explicitly stated the reason for the shutdown is because of the unprofitability of Unit 1. Unit 1 has lost the company over 300 million dollars over the last half-decade despite it being one of Exelon's best-performing power plants.

Shut down of Unit 1 can go in two possible directions, the first being the immediate dismantlement immediately after the radioactive fuel has been moved away from the plant. The dismantlement can proceed after the spent fuel is removed from the pool, put into storage casks, and the casks are transferred to the ISFSI pad for storage until the DOE takes them away to a DOE repository. Dismantling the plant this way will take anywhere from 8 to 10 years. The second option Exelon could take is the long-term storage, which involves mothballing the plant and letting the radiation decay for up to 60 years on its own to a harmless level before completely dismantling the buildings. The advantage to the long-term storage is the lack of radiation when the dismantlement would begin but the disadvantage would be the possible lack of qualified workers at the time of dismantlement. Exelon would also have to pay for limited maintenance and security of the plant over the potential sixty years. The entirety of the spent fuel will be moved to the Londonderry Township facility, which is another process that could take decades to complete.

About 70 state legislators signed the industry-inspired Nuclear Caucus but made no financial commitments.

The Nuclear Regulatory Commission's estimate of the risk each year of an earthquake intense enough to cause core damage to the reactor at Three Mile Island was 1 in 25,000, according to an NRC study published in August 2010.

All content from Kiddle encyclopedia articles (including the article images and facts) can be freely used under Attribution-ShareAlike license, unless stated otherwise. Cite this article:
Three Mile Island Nuclear Generating Station Facts for Kids. Kiddle Encyclopedia.