The first Hershey's Chocolate World is located off of Hersheypark Drive, in Hershey, Pennsylvania, and is in an entertainment complex that also includes Hersheypark, Hersheypark Stadium, Hersheypark Arena, Hershey Museum, and Giant Center. The Las Vegas location is where the Broadway Theatre used to be.

Parking is available via a separate lot that is free for the first three hours only, or via the Hersheypark parking lot (when the park is open), which offers a tram service to and from Hershey's Chocolate World. While the facility is open year-round (except Christmas), hours vary depending on the season, ranging anywhere from 9 am to 11 pm.

Hershey's Chocolate World was built as a replacement of the Hershey chocolate plant tour, which had reached its capacity and no longer was able to handle the large numbers of visitors per year. The facility opened on June 30, 1973, and took inspiration from World's Fair pavilions. Through its first year of operations, Chocolate World had over 1.4 million visitors. In its first thirteen years of operation, the visitor's center received 20 million visitors.

A $4.5 million update to the chocolate-making tour ride opened in 1988, featuring a curious robot for a host named CP-1. It was phased out within a year. In the mid-1990s, the ride saw numerous revisions on a small scale, including the removal of several show elements. The last renovation occurred in early 2016 when several scenes in the chocolate tour ride were replaced. Today, there are still portions of the ride that have changed very little from the 1978 updated version, including the sorting and cleaning, roll refining, milling, and chocolate conching scenes.

The building features brownstone quarried out of the neighboring town of Hummelstown. In 2014, the retail area received major renovations as well as a new entrance and queue area for Hershey's Chocolate Tour. 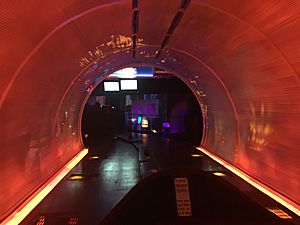 A memorable sequence from the ride, where cars travel inside a roaster with special effects

All content from Kiddle encyclopedia articles (including the article images and facts) can be freely used under Attribution-ShareAlike license, unless stated otherwise. Cite this article:
Hershey's Chocolate World Facts for Kids. Kiddle Encyclopedia.