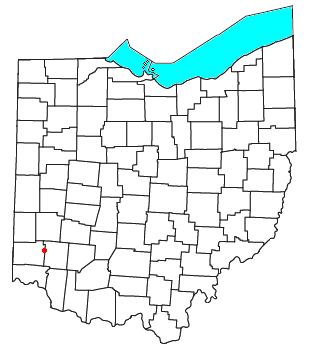 Blue Ball is a town in the southwestern part of the U.S. state of Ohio that was established in 1820 at the intersection of the Dixie Highway (later U.S. Route 25). "The Blue Ball hung at the intersection of where the Historic Toddle Inn is located.... This was located just several hundred feet from what is said to be State Route 122." and what became State Route 122. It was originally called "Guilford" after Nathaniel Guilford, a prominent state politician at the time. Blue Ball straddles the line between Butler and Warren Counties and was in Lemon Township, Butler County, Ohio and Franklin Township, Warren County, Ohio.

According to local legend, the town was on a busy stage coach stop between Dayton and Cincinnati along the Dixie highway, but kept being passed by because most stage coach drivers were illiterate and could not read the sign with the town's name on it. So, in 1862, the town council changed the municipal name to reflect a landmark, a blue-colored metal sphere that was suspended above the intersection of the two highways at the heart of town. A modern successor to that blue ball still hangs on Dixie Highway. It was granted a post office, since closed, in 1844.

Blue Ball was annexed by nearby Middletown in 1993.

A caller to the show Dennis Miller Live was said to come from this city, making Miller and guest George Carlin laugh, and Miller asks, "I know you've been on hold for a long time?"

All content from Kiddle encyclopedia articles (including the article images and facts) can be freely used under Attribution-ShareAlike license, unless stated otherwise. Cite this article:
Blue Ball, Ohio Facts for Kids. Kiddle Encyclopedia.