Kids Encyclopedia Facts
Not to be confused with Butler County, Ohio.

Butler is a village in Richland County in the U.S. state of Ohio. It is part of the Mansfield, Ohio Metropolitan Statistical Area. The population was 933 at the 2010 census.

Before Butler was founded and named, it was the site of the Delaware Indians hunting ground. Helltown, as the Indians called it, was chosen for its plentiful wild game and fertile farmlands. As early as 1808, settlers were living in Northeastern Worthington township, however the area that makes up Butler was not settled until another 10 years. Joseph Craig was the first white man to settle in the Butler area. James Monroe, the fifth president of the United States, had given Craig a land grant in 1823. Samuel Lewis, another interesting man, traveled through the area in 1809. On January 7, 1813, Lewis organized and divided Richland area into townships. Butler became Worthington township. Independence was laid out on the northwest quarter of Section 20, January 12, 1848, by Daniel Spohn. In the early days of its existence it was nicknamed "Spohntown " and " Squeelgut," but was named Independence by Thomas B. Andrews, rather in a spirit of defiance at the attitude of Bellville, which was not a friendly one to the aspiring village. The name was changed to Butler in the 1870s, after a Mexican war hero, General William Butler. In 1891 the name Independence was changed to Butler to match the post office. Andrews was born in 1807 and arrived in the village on November 15, 1833. Later Daniel Spohn and Andrews had the town laid out. Spohn was born in 1781 and died January 18, 1865, 13 years after the town was founded on January 12, 1848. Andrews was its first Postmaster, and, before the town was laid out, kept the office in his house near the site. After the town was laid out and a warehouse erected, he moved the office into the warehouse. The land upon which the town stands was entered on May 13, 1820 by William Simmons. The town plat was surveyed by Joseph Hastings. Mr. Andrews was instrumental in getting the town established and laying it out, taking a plot of land for pay.

The first store was started by William Lamley, who kept groceries and whisky. It may be remarked here that Independence is a temperance town, and will not allow (since the Bowersox affair mentioned in another chapter) any saloon to exist in the place. Lamley's store was a small frame building, near the railroad, in the north end of the town. He afterward erected a building, which is now occupied by Downing as a store, and started a hotel. Joseph Geary kept this hotel, the first in the place. David Teeter erected a second hotel. John Diltz, a carpenter and present Postmaster, erected the next dwelling, and shortly after, Daniel Garber erected a shoe-shop on Main Street. William Clapper erected the next building and kept boarders. 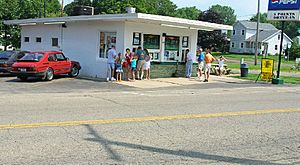 Gen. G. A. Jones came up from Mount Vernon, erected a warehouse, started a store and dealt in produce. In 1856, I. W. Pearce purchased the warehouse of Jones, conducted the business, and was also railroad agent. This gentleman at present keeps the principal store in the place, and does what banking business is necessary.

When the town was out, the schoolhouse A-frame was a short distance south of town.

In 1868, the present building was erected. It is a two-story frame, and occupied by two teachers and about one hundred pupils. The B&O railroad played a big part in the town's development. The railroad was built in 1853 and it was the only railroad in the United States noted to enter and leave the town from the same direction (west). In 1872, there was two passenger trains that collided killing eight people and injuring 40 more.

In 1877, the village was incorporated, the first Mayor being J. M. McLaughlin; the second and present Mayor, George W. McBee.

There are four dry-goods and grocery stores, one hardware, one stove and tin, and several smaller establishments; two churches, one hotel, and a proper proportion of mechanics and professional men. The population is about four hundred. The place stands in a great land in the Baltimore & Ohio Railroad. - From "The History of Richland County" by A. A. Graham 1880.

There were 362 households, of which 36.5% had children under the age of 18 living with them, 53.3% were married couples living together, 13.0% had a female householder with no husband present, 5.2% had a male householder with no wife present, and 28.5% were non-families. 24.9% of all households were made up of individuals, and 10% had someone living alone who was 65 years of age or older. The average household size was 2.57 and the average family size was 3.05.

Butler is located within the Clear Fork Valley Local School District. Schools in the district that are located in Butler are Butler Elementary School. Clear Fork Middle School and Clear Fork High School are located just outside Bellville.

Butler has a public library, a branch of the Mansfield–Richland County Public Library.

All content from Kiddle encyclopedia articles (including the article images and facts) can be freely used under Attribution-ShareAlike license, unless stated otherwise. Cite this article:
Butler, Ohio Facts for Kids. Kiddle Encyclopedia.