History of Cincinnati facts for kids

Cincinnati was founded in late December 1788 by Mathias Denman, Colonel Robert Patterson and Israel Ludlow. The original surveyor, John Filson, named it "Losantiville"[1] from four terms, each of different language, before his death in October 1788. It means "The city opposite the mouth of the (Licking) River", "ville" is French for "city", "anti" is Greek for "opposite", "os" is Latin for "mouth", and "L" was all that was included of "Licking River".

In 1789 Fort Washington was built to protect the settlements in the Northwest Territory. The post was constructed under the direction of General Josiah Harmar and was named in honor of President George Washington. [2]

In 1790, Arthur St. Clair, the governor of the Northwest Territory, changed the name of the settlement to "Cincinnati" in honor of the Society of the Cincinnati, of which he was president. The society gets its name from Cincinnatus, the Roman general and dictator, who saved the city of Rome from destruction and then quietly retired to his farm. The society honored the ideal of return to civilian life by military officers following the Revolution rather than imposing military rule. To this day, Cincinnati in particular, and Ohio in general, is home to a disproportionately large number of descendants of Revolutionary War soldiers who were granted lands in the state. Cincinnati's connection with Rome still exists today through its nickname of "The City of Seven Hills" [3] (a phrase commonly associated with Rome) and the town twinning program of Sister Cities International.

During the Civil War, a series of six artillery batteries were built along the Ohio River to protect the city. Only one, Battery Hooper, now the James A. Ramage Civil War Museum in Fort Wright, Kentucky, is open to the public.

During the American Civil War, Cincinnati played a key role as a major source of supplies and troops for the Union Army. It also served as the headquarters for much of the war for the Department of the Ohio, which was charged with the defense of the region, as well as directing the army's offensive into Kentucky and Tennessee. Due to Cincinnati's commerce with slave states and history of settlement by southerners from eastern states, many people in the area were "Southern sympathizers". Some participated in the Copperhead movement in Ohio. In July 1863, the Union Army instituted martial law in Cincinnati due to the imminent danger posed by the Confederate Morgan's Raiders. Bringing the war to the North, they attacked several outlying villages, such as Cheviot and Montgomery.

'Porkopolis' and other nicknames

In 1802, Cincinnati was chartered as a village, and in 1819, it was incorporated as a city. The introduction of steam navigation on the Ohio River in 1811 and the completion of the Miami and Erie Canal helped the city grow to 115,000 citizens by 1850. The nickname Porkopolis was coined around 1835, when Cincinnati was the country's chief hog packing center, and herds of pigs traveled the streets. Called the "Queen of the West" by Henry Wadsworth Longfellow (although this nickname was first used by a local newspaper in 1819), Cincinnati was an important stop on the Underground Railroad, which helped slaves escape from the South. 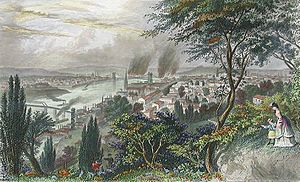 Cincinnati also is known as the "City of Seven Hills". The seven hills are fully described in the June, 1853 edition of the West American Review, "Article III--Cincinnati: Its Relations to the West and South". The hills form a crescent from the east bank of the Ohio River to the west bank: Mount Adams, Walnut Hills, Mount Auburn, Vine Street Hill, College Hill, Fairmount, and Mount Harrison.

Cincinnati was the site of many historical beginnings. In 1850 it was the first city in the United States to establish a Jewish Hospital. It is where America's first municipal fire department, the Cincinnati Fire Department, was established in 1853. Established in 1867, the Cincinnati Red Stockings (a.k.a. the Cincinnati Reds) became the world's first professional (all paid, no amateurs) baseball team in 1869. In 1935, major league baseball's first night game was played at Crosley Field. Cincinnati was the first municipality to build and own a major railroad in 1880. In 1902, the world's first re-inforced concrete skyscraper was built, the Ingalls Building.

In 1888, Cincinnati German Protestants community started a "sick house" ("Krankenhaus") staffed by deaconesses. It evolved into the city's first general hospital, and included nurses' training school. It was renamed Deaconess Hospital in 1917.

"The Sons of Daniel Boone", a forerunner to the Boy Scouts of America, began in Cincinnati in 1905. Because of the city's rich German heritage, the pre-prohibition era allowed Cincinnati to become a national forerunner in the brewing industry. During experimentation for six years (until 1939), Cincinnati's AM radio station, WLW was the first to broadcast at 500,000 watts. In 1943, King Records (and its subsidiary, Queen Records) was founded, and went on to record early music by artists who became highly successful and influential in Country, R&B, and Rock. WCET-TV was the first licensed public television station, established in 1954. [4] Cincinnati is home to radio's WEBN 102.7 FM, the longest-running album-oriented rock station in the United States, first airing in 1967. In 1976, the Cincinnati Stock Exchange became the nation's first all-electronic trading market.

After World War II, Cincinnati unveiled a master plan for urban renewal that resulted in modernization of the inner city.

The City of Cincinnati and Hamilton County are currently developing the Banks - an urban neighborhood along the city's riverfront including restaurants, clubs, offices, and homes with skyline views.

Cincinnati was a border town between slave states and free states in the Union during the Civil War. There have been many incidents of race-based violence before and after the Civil War with the most notable and most recent one being the 2001 Cincinnati Riots.

Situated across the Ohio River from the border state of Kentucky, which allowed slavery, Ohio was a major focal point for commerce and transportation with the South. Although slavery was not permitted before the Civil War, some in the city were not accepting of blacks. Many residents had personal and business ties to slaveholders across the river. Other whites competed for jobs with the free blacks who had migrated there from Virginia and other southern states to make new starts in the Northwest. Tensions broke out in riots and racial purges. Confrontations occurred between abolitionists and slaveholders over runaway slaves and free blacks kidnapped into bondage.

The Cincinnati Riots of 1829 broke out in July and August 1829 as whites attacked blacks in the city. Many of the latter had come from the South to establish a community with more freedom. Some 1200 blacks left the city as a result of rioting and resettled in Canada. Blacks in other areas tried to raise money to help people who wanted to relocate to Canada. The riot was a topic of discussion in 1830 among representatives of seven states at the first Negro Convention, led by Bishop Richard Allen and held in Philadelphia, Pennsylvania.

As the anti-slavery movement grew, there were more riots in 1836, when whites attacked a press run by James Birney, who had started publishing the anti-slavery weekly The Philanthropist. The mob grew to 700 and also attacked black neighborhoods and people. Another riot occurred in 1841.

Cincinnati was an important stop for the Underground Railroad in pre-Civil War times. It bordered a slave state, Kentucky, and is often mentioned as a destination for many people escaping the bonds of slavery. There are many harrowing stories involving abolitionists, runaways, slave traders and free men.

Allen Temple African Methodist Episcopal Church was founded in 1824 as the first Black church in Ohio. It was an important stop on the Underground Railroad for many years. It seeded many other congregations in the city, across the state, and throughout the Midwest.

Lane Theological Seminary was established in the Walnut Hills section of Cincinnati in 1829 to educate Presbyterian ministers. Prominent New England pastor Lyman Beecher moved his family (Harriet and son Henry) from Boston to Cincinnati to become the first President of the Seminary in 1832.

Lane Seminary is known primarily for the "debates" held there in 1834 that influenced the nation's thinking about slavery. Several of those involved went on to play an important role in the abolitionist movement and the buildup to the American Civil War. [5] Abolitionist author Harriet Beecher Stowe wrote Uncle Tom's Cabin, first published on March 20, 1852. The book was the best-selling novel of the 19th century (and the second best-selling book of the century after the Bible) and is credited with helping to fuel the abolitionist cause in the United States prior to the American Civil War. In the first year after it was published, 300,000 copies of the book were sold. In his 1985 book Uncle Tom's Cabin and American Culture, Thomas Gossett observed that "in 1872 a biographer of Horace Greeley would argue that the chief force in developing support for the Republican Party in the 1850s had been Uncle Tom's Cabin." The Harriet Beecher Stowe House in Cincinnati is located at 2950 Gilbert Avenue, and it is open to the public.

The National Underground Railroad Freedom Center, located in downtown Cincinnati on the banks of the Ohio River, largely focuses on the history of slavery in the U.S., but has an underlying mission of promoting freedom in a contemporary fashion for the world. Its grand opening ceremony in 2002 was a gala event involving many national stars, musical acts, fireworks, and a visit from the current First Lady of the United States. It is physically located between Great American Ballpark and Paul Brown Stadium, which were both built and opened shortly before the Freedom Center was opened.

All content from Kiddle encyclopedia articles (including the article images and facts) can be freely used under Attribution-ShareAlike license, unless stated otherwise. Cite this article:
History of Cincinnati Facts for Kids. Kiddle Encyclopedia.