Johnny Lee Bench (born December 7, 1947) is an American former professional baseball catcher who played in the Major Leagues for the Cincinnati Reds from 1967 to 1983 and is a member of the National Baseball Hall of Fame. Bench is a 14-time All-Star selection and a two-time National League Most Valuable Player. He was a key member of the Big Red Machine that won six division titles, four National League pennants, and two consecutive World Series championships. ESPN has called him the greatest catcher in baseball history. 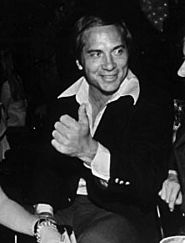 Bench was elected to the National Baseball Hall of Fame in Cooperstown, New York, in 1989. He was elected in his first year of eligibility, and appeared on 96% of the ballots, the third-highest percentage at that time. Three years earlier, Bench had been inducted into the Cincinnati Reds Hall of Fame in 1986 and his uniform #5 was retired by the team. He is currently on the Board of Directors for the Cincinnati Reds Hall of Fame. In 1989, he became the first individual baseball player to appear on a Wheaties box, a cereal he ate as a child.

For a time in the 1980s Bench was a commercial spokesman for Krylon paint, featuring a memorable catchphrase: "I'm Johnny Bench, and this is Johnny Bench's bench."

In 1985, Bench starred as Joe Boyd/Joe Hardy in a Cincinnati stage production of the musical Damn Yankees, which also included Gwen Verdon and Gary Sandy. He also hosted the television series The Baseball Bunch from 1982 to 1985. A cast of boys and girls from the Tucson, Arizona, area would learn the game of baseball from Bench and other current and retired greats. The Chicken provided comic relief and former Los Angeles Dodgers manager Tommy Lasorda appeared as "The Dugout Wizard."

After turning 50, Bench was a part-time professional golfer and played in several events on the Senior PGA Tour. He has a home at the Mission Hills-Gary Player Course in Rancho Mirage, California. 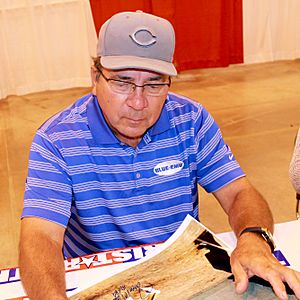 Bench signs autographs in Houston in May 2014

In 2008, Bench co-wrote the book Catch Every Ball: How to Handle Life's Pitches with Paul Daugherty. An autobiography published in 1979 called Catch You Later was co-authored with William Brashler. Bench has also broadcast games on television and radio, and is an avid golfer, having played in several Champions Tour tournaments.

On September 17, 2011, the Cincinnati Reds unveiled a statue of Bench at the entrance way of the Reds Hall of Fame at Great American Ball Park. The larger-than-life bronze statue by Tom Tsuchiya, shows Bench in the act of throwing out a base runner. Bench called the unveiling of his statue, his "greatest moment."

All content from Kiddle encyclopedia articles (including the article images and facts) can be freely used under Attribution-ShareAlike license, unless stated otherwise. Cite this article:
Johnny Bench Facts for Kids. Kiddle Encyclopedia.