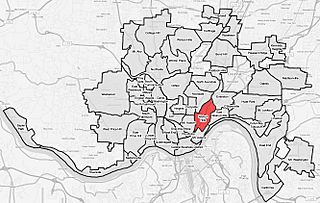 Walnut Hills is a neighborhood of Cincinnati, Ohio.

Walnut Hills is a neighborhood in Cincinnati, Ohio, USA. One of the city’s oldest hilltop neighborhoods, it is a large diverse area on the near east side of Cincinnati. Eden Park is the gateway to Walnut Hills when driving north from downtown, and the University of Cincinnati is less than 10 minutes away. The neighborhood is redeveloping, restoring many of its buildings and introducing new businesses to the area.

The neighborhood was named from the farm of an early settler, Reverend James Kemper, which he called Walnut Hill. For generations, the Kemper family lived in the Kemper Log House. Walnut Hills was annexed to the City of Cincinnati in September, 1869.

In addition to Walnut Hill’s Victorian homes, it has many architectural treasures and historical sites. The Harriet Beecher Stowe House (now an Ohio State Historical site with highlights of the abolitionist movement and the African American struggle for justice) was where Harriet Beecher Stowe and her family lived, as well as the site where she researched Uncle Tom's Cabin.

The commercial district at Peebles' Corner, originally called Kemper's Corner, was once the busiest district outside Downtown Cincinnati, with six street cars lines intersecting at McMillan and Gilbert by the end of the 19th century.

Walnut Hills buildings are of historic architecture in a range of styles. Several historic districts in Walnut Hills have been listed on the National Register.

All content from Kiddle encyclopedia articles (including the article images and facts) can be freely used under Attribution-ShareAlike license, unless stated otherwise. Cite this article:
Walnut Hills, Cincinnati Facts for Kids. Kiddle Encyclopedia.