Cincinnati Playhouse in the Park facts for kids 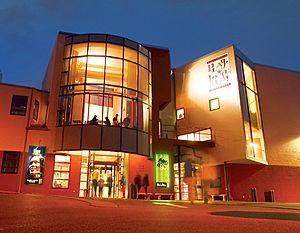 Cincinnati Playhouse in the Park at night

The Cincinnati Playhouse in the Park is a regional theatre in the United States. It was founded in 1959 by college student Gerald Covell and was one of the first regional theatres in the United States. Located in Eden Park, the first play that premiered at the Playhouse on October 10, 1960, was Meyer Levin's Compulsion. The Playhouse has maintained a regional and national reputation in the theatre community for bringing prominent plays to Cincinnati and for hosting national premieres such as Tennessee Williams' The Notebook of Trigorin in 1996 and world premieres such as the Pulitzer Prize-nominated Coyote on a Fence in 1998 and Ace in 2006.

The Playhouse facility comprises two theatres, the larger Robert S. Marx Theatre and the smaller Shelterhouse. The Playhouse is among the members of the League of Resident Theatres. In addition to a full ten-month season of plays, the Playhouse also offers acting classes and programs for children.

In 1973-1975, the Playhouse was the first professional regional theatre to be led by Harold Scott.

Scott was followed by Michael Murray, who was artistic director at the Playhouse until 1985. Murray was co-founder of the Charles Playhouse in Boston and is one of the early leaders of the Regional Theatre Movement.

The Playhouse was under the leadership of Edward Stern (Producing Artistic Director) and Buzz Ward (Executive Director) between 1992 and 2012. In 2012, Blake Robison became artistic director and Buzz Ward was promoted to managing director.

The Shelterhouse theatre was named for Jay Thompson until 2017 and will be renamed the Rosenthal Shelterhouse Theatre in 2019.

Currently Mount Adams, home of the Cincinnati Art Museum and Cincinnati Playhouse in the Park, is undergoing major renovation that will result in beautiful approaches to the summit. https://www.bizjournals.com/cincinnati/news/2020/05/07/cincinnati-art-museum-to-unveil-first-phase-of-art.html

All content from Kiddle encyclopedia articles (including the article images and facts) can be freely used under Attribution-ShareAlike license, unless stated otherwise. Cite this article:
Cincinnati Playhouse in the Park Facts for Kids. Kiddle Encyclopedia.