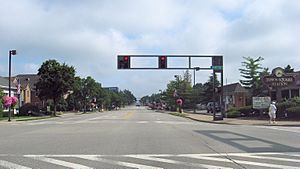 Blue Ash is a city in Hamilton County, Ohio, United States, and an inner suburb of Cincinnati, which is located to the south. The population was 12,114 at the 2010 census.

Blue Ash can be reached by Interstate 71 to the east, Interstate 275 to the north, and Ronald Reagan Cross County Highway to the south.

The area that is now Blue Ash was settled circa 1791. In 1797, the first settlers built Carpenter's Run Baptist Church out of blue ash logs, giving the area its eventual name.

Blue Ash was the site of Cincinnati–Blue Ash Airport from 1921 to 2012. Originally a private airfield called Grisard Field, it was sold to the City of Cincinnati in 1946, becoming Ohio's first municipal airport. Cincinnati desired to expand the airport for major commercial service through the 1950s, but Blue Ash fought the city by incorporating first as a village in 1955 and then as a city in 1961. Eventually, through Reed Hartman's Community Improvement Corporation, Cincinnati developed the surrounding area as an industrial park and golf course. The airport closed on August 29, 2012, and the property was sold to the City of Blue Ash, which opened Summit Park on the property.

In 1998, Blue Ash was to be the northern end of a proposed 19-mile (31 km) MetroMoves light rail line, but the proposal was rejected by Hamilton County voters.

There were 5,015 households of which 31.1% had children under the age of 18 living with them, 53.7% were married couples living together, 10.4% had a female householder with no husband present, 3.8% had a male householder with no wife present, and 32.1% were non-families. 26.7% of all households were made up of individuals and 10.3% had someone living alone who was 65 years of age or older. The average household size was 2.40 and the average family size was 2.91.

Blue Ash offers two summer events each year: "Red, White, and Blue Ash"; and "Taste of Blue Ash". "Red, White and Blue Ash" is held annually in celebration of the 4th of July and features the biggest Independence Day firework display in the region. These events draw internationally popular headlining rock acts. On July 4, 2010, the bands Yes and Peter Frampton drew a record estimated 150,000 people to that year's Red, White, and Blue Ash event. Due to budget constraints the city decided to suspend their "Summerbration" event for 2010-2013, with hopes to resume the event in the near future.

Blue Ash and the neighboring city of Montgomery partner to support the Blue Ash Montgomery Symphony Orchestra, which performs at local events. In addition, the City provides an annual Concert Series each year during the summer months.

Blue Ash is a sister city of Ilmenau in Germany.

All content from Kiddle encyclopedia articles (including the article images and facts) can be freely used under Attribution-ShareAlike license, unless stated otherwise. Cite this article:
Blue Ash, Ohio Facts for Kids. Kiddle Encyclopedia.