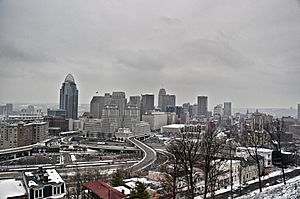 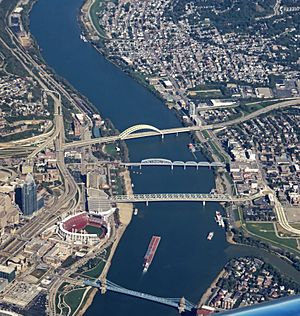 Four bridges over the Ohio River in downtown Cincinnati. At right, parts of Bellevue, Newport, and Covington are visible. 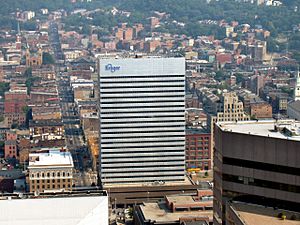 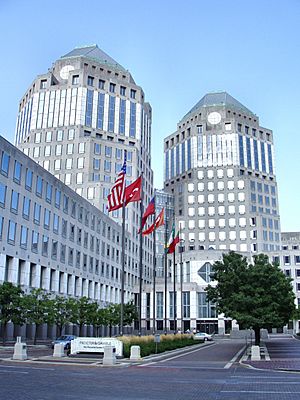 Downtown Cincinnati is the central business district of Cincinnati, Ohio, as well the economic and symbiotic center of the Cincinnati metropolitan area. It also contains a number of urban neighborhoods in the low land area between the Ohio River and the high land areas of uptown. These neighborhoods include Over-the-Rhine, Pendleton, Queensgate, and West End.

Often considered to be the heart of Cincinnati, Fountain Square is located in the center of the Central Business District. The 1871 dedicated Tyler Davidson Fountain stands prominently on the often busy city square. Other city parks located Downtown are Lytle Park and Piatt Park. The Backstage District that sprang up around the Aronoff Center contains nightlife and dining options.

Downtown Cincinnati is marked by its large collection of historic architecture and contains several historic districts and dozens of buildings on the National Register of Historic Places listings in downtown Cincinnati, Ohio.

All but one of the twenty-five tallest buildings in Cincinnati are located in Downtown Cincinnati. The Carew Tower has a public observation deck on the forty-ninth floor.

Since 1971, the Cincinnati Skywalk has connected buildings throughout downtown via a series of primarily indoor, elevated walkways. The Skywalk was officially completed as a 1.3 mile contiguous path in 1997, but has since fallen into disfavor by city leaders, and some sections have been removed.

Downtown Cincinnati is an increasingly residential area with former commercial space, such as Park Place at Lytle, being converted into luxury condos.

The Banks is a waterfront mixed-use development hosting bars and restaurants. It is especially crowded following games at the adjacent Paul Brown Stadium and Great American Ball Park, the stadiums of the Cincinnati Bengals and Cincinnati Reds.

Downtown is a transportation hub for the entire region. Downtown is served by Fort Washington Way which connects interstates 71 and 75 with Route 50.

Downtown has long been the economic hub of Cincinnati. In the mid-nineteenth century, 16 of the city's 24 banks were located on Third Street near the busy Public Landing river port. Towards the end of the nineteenth century, the center of business activity moved to Fourth Street, closer to where it remains today.

All content from Kiddle encyclopedia articles (including the article images and facts) can be freely used under Attribution-ShareAlike license, unless stated otherwise. Cite this article:
Downtown Cincinnati Facts for Kids. Kiddle Encyclopedia.