Northern Kentucky is the third-largest metropolitan area in the U.S. Commonwealth of Kentucky after Louisville and Lexington, and its cities and towns serve as the de facto "south side" communities of Cincinnati, Ohio. The three main counties of this metro area are Boone, Kenton, and Campbell Counties along the Ohio River (shown in red on the map), with other counties also included. The label "Northern Kentucky" (abbreviated NKY) is used to demonstrate the common identity shared across county and city lines by the residents of these northern counties. Arguably, the label seeks to reverse the divisions that occurred to Campbell County, which, in 1794, included the land of Boone, Kenton, Pendleton Counties, and most of Bracken and Grant Counties. The urban and suburban areas of the northern counties are densely populated. Indeed, of Greater Cincinnati's over two million residents, 450,994 of them live in Northern Kentucky (as of 2019), with the three most northern counties contributing 394,163 residents themselves. The largest cities In each of the three most northern counties are Covington, Florence, and Fort Thomas. 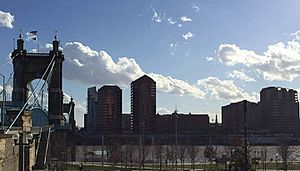 On July 17, 2019, Mr. Brent Cooper, a member of the Northern Kentucky Chamber of Commerce, called for the Northern Kentucky community to consider reuniting the counties (Boone, Kenton, and Campbell counties) into one county to better reflect the region's common identity and strengthen its political voice and economic marketability.

Northern Kentucky is located within a climatic transition zone and is at the extreme northern limit of the humid subtropical climate. Evidence of both humid subtropical climate and humid continental climate can be found here, particularly noticeable by the presence of plants indicative of each climatic region; for example, the Southern magnolia, and Crape-myrtle, from the subtropics and the Blue spruce, Maple, and Eastern Hemlock from cooler regions are successful landscape plants in and around Northern Kentucky. Some significant moderating variables for the overall climate of Northern Kentucky include: the Ohio River, the region's relatively large hills and valleys, and an urban heat influence due to the proximity of the Cincinnati/Northern Kentucky metropolitan area. The common wall lizard, introduced from Italy in the 1950s, is an example of fauna in the area that lends a subtropical ambiance to areas near the urban core of Cincinnati. Northern Kentucky is considered to be within the periphery of both the Midwest and the Upland South.

All content from Kiddle encyclopedia articles (including the article images and facts) can be freely used under Attribution-ShareAlike license, unless stated otherwise. Cite this article:
Northern Kentucky Facts for Kids. Kiddle Encyclopedia.