Cathedral Basilica of the Assumption (Covington, Kentucky) facts for kids 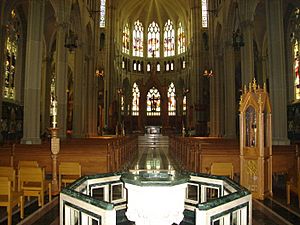 St. Mary's Cathedral Basilica of the Assumption interior in 2006

The Roman Catholic St. Mary's Cathedral Basilica of the Assumption in Covington, Kentucky, is a minor basilica in the United States. Construction of the cathedral began under the Diocese of Covington's third bishop, Camillus Paul Maes, in 1895 to replace an 1834 frame church that was inadequate for the growing congregation. Pope Pius XII elevated the cathedral to the rank of minor basilica December 8, 1953.

The sanctuary was designed by Detroit architect Leon Coquard and is inspired by the Notre Dame Cathedral in Paris. Services were first held in 1901 with the Madison Avenue façade, designed by local architect David Davis, added between 1908 and 1910. The structure is constructed of Bedford stone and the roofs are covered with red ludovici tile. It measures 194 ft × 144 ft (59 m × 44 m) and the nave reaches a height of 81 ft (25 m). The cathedral project terminated in 1915, though it remains incomplete to this day with the planned 52 ft (16 m) towers unbuilt.

The interior was modeled after St. Denis in France. It contains murals by Covington native Frank Duveneck with the high altar carved from Carrara marble with floors of Rosata and Breche marble. The north transept is said to contain the world's largest handmade church stained glass window, at 67 ft × 24 ft (20.4 m × 7.3 m). It depicts the Ecumenical Council of Ephesus in 431 AD that proclaimed Mary as the Mother of God.

The cathedral houses three pipe organs. The south transept gallery holds the pipe organ designed and built in 1933 for the cathedral by Henry Willis III during his tenure at the Wicks Organ Company of Highland, Illinois. Originally a three-manual console with 43 ranks of pipes, Aultz-Kersting Organ renovated and enlarged this instrument in 1982 to four-manuals with 65 ranks.

The west gallery, below the rose window, is occupied by the two-manual organ originally built for St. Joseph Roman Catholic Church in Covington, Kentucky, in 1858 by Mathais Schwab of Cincinnati, Ohio. When the St. Joseph building was razed in 1970, the Schwab organ was moved to St Mary's. The Schwab organ was altered to fit the new location, but retains most of its original components, including its mechanical key and stop actions, ivory keyboards and faux-grained casework. It contains 21 ranks. In 2002, the cathedral purchased a one-manual, 20-rank portable organ for use in various parts of the sanctuary.

All content from Kiddle encyclopedia articles (including the article images and facts) can be freely used under Attribution-ShareAlike license, unless stated otherwise. Cite this article:
Cathedral Basilica of the Assumption (Covington, Kentucky) Facts for Kids. Kiddle Encyclopedia.