Boone County is a county located in the U.S. state of Kentucky. As of the 2010 census, the population was 118,811, making it the fourth-most populous county in Kentucky. Its county seat is Burlington. The county was formed in 1798 from part of Campbell County. and was named for frontiersman Daniel Boone.

Boone County is part of the Cincinnati-Middletown, OH-KY-IN Metropolitan Statistical Area. It is the location of the Cincinnati/Northern Kentucky International Airport, which serves Cincinnati and the tri-state area and was the former headquarters of Comair.

Native Americans left a large late historic village in Petersburg that contained "at least two periods of habitation dating to 1150 A.D. and 1400 A.D."

An unnamed Frenchman in 1729 drew an area on his chart where Big Bone Lick State Park in modern-day Boone County exists with a French inscription that translates to "where they found the bones of an elephant." Later on, another Frenchman, Charles le Moyne de Longueuil (1687–1755) would be credited with investigating the Big Bone Lick area.

In 1789, 10-year-old John Tanner was captured by Shawnee Indians in Boone County, across from the mouth of the Great Miami River, while his Presbyterian minister father, brother, and their slaves were planting corn.

Boone County was founded in 1798, and named after Daniel Boone.

On January 28, 1856, Robert and a pregnant Margaret "Peggy" Garner, together with family members, escaped and fled to Cincinnati, Ohio, along with several other slave families. Seventeen people were reported to have been in their party. In the coldest winter in 60 years, the Ohio River had frozen. The group crossed the ice just west of Covington, Kentucky at daybreak, and escaped to Cincinnati, then divided to avoid detection. They set out for Joseph Kite's house in Cincinnati.

Margaret Garner would become famous for slitting her own daughter's throat (Mary) to prevent her from going back into slavery when Archibald K. Gaines and his posse, along with Federal Marshals, caught up to the fleeing slaves at Joseph Kite's house.

Margaret Garner was first owned by, and may have been the daughter of, the plantation owner John Pollard Gaines himself. In December 1849, the plantation was sold along with all the slaves to John P. Gaines' younger brother, Archibald K. Gaines. The Gaines family lived on a farm called Maplewood in Boone County, Kentucky, just west of Richwood Presbyterian Church, of which Archibald K. Gaines was a member. 3 of Margaret Garner's children, including Mary, the daughter whose throat Margaret Garner slashed, were likely the children of Archibald K. Gaines, the only adult white male at Maplewood. The timing suggests they were each conceived after his wife had become pregnant and was unavailable to him.

Margaret Garner's story was the inspiration for the novel Beloved (1987) by Nobel Prize winner Toni Morrison (that later was adapted into a film of the same name starring Oprah Winfrey), as well as for her libretto for the early 21st century opera Margaret Garner (2005), composed by Richard Danielpour.

The Creation Museum (Petersburg), operated by the apologetics ministry Answers in Genesis, as well as Big Bone Lick State Park, "birthplace of American paleontology," are located in Boone County. 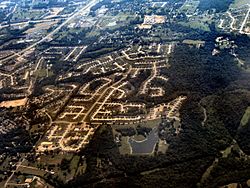 Burlington from the air, looking east

All content from Kiddle encyclopedia articles (including the article images and facts) can be freely used under Attribution-ShareAlike license, unless stated otherwise. Cite this article:
Boone County, Kentucky Facts for Kids. Kiddle Encyclopedia.